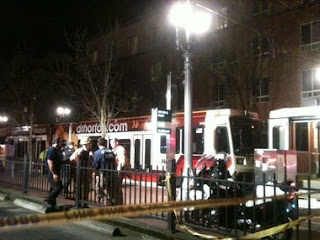 The woman caught beneath a Yellow Line MAX train Friday night as it was leaving the TriMet station at Northwest Sixth Avenue and Davis Street has died, TriMet reported Saturday morning.

Officials are not releasing her name pending notification of family.

The woman slid beneath the northbound train about 9:20 p.m. Friday after her cane made contact with the train as it pulled into the station, throwing her off balance, TriMet said. She reportedly fell between the two ends of of the train's cars.

Portland Fire & Rescue responded, extricated the woman and transported her to OHSU Hospital.
Posted by Al M at 1:15 PM