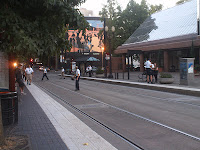 The station agents, road supervisors, fare inspectors and dispatchers are very loyal to Trimet. How do I know that, because I listen to dispatch almost every day.
To get promoted at Trimet you have to be a company man/woman.
I find it sorta despicable from my point of view. Working so hard to protect a government bureaucracy that has lost all ethics and is actively screwing its union employees. (yes white shirts are union members, although you can hardly see it)
Of course everybody at Trimet is scared of losing their job, and this is a country full of wage slaves who live their lives in fear.
And the more you make the more you have to lose. It's all about the money. Money has always been the tool for corruption of people.
Come up with enough money and you can buy anything, including people.
Anyway Trimet has a very loyal workforce of 'white shirts' who do everything they are told to do. I only have met two who have actively tried to get change by taking a chance, and both of them were threatened with job loss.
Such a culture of followers, sheeple.
In the end that will be the undoing of the union here, Mcfarlane knows it too.
Posted by Al M at 12:00 AM