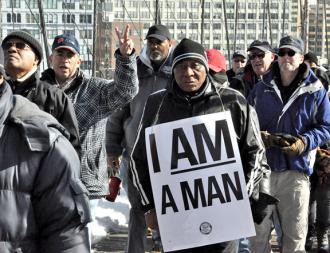 And where is it that we have heard and seen  this before?

Bloomberg justified his refusal to even negotiate by claiming that since the city didn't directly employ bus personnel, it wasn't a party to the strike. This was rejected by the National Labor Relations Board (NLRB), which found that the city and the bus companies were both "primary employers" of the striking workers. The mayor simply ignored the NLRB finding.


A MONTH-long strike by more than 8,000 school bus drivers, mechanics and attendants in New York City was "suspended" on February 15 by the executive committee of Amalgamated Transit Union (ATU) Local 1181, in a major victory for billionaire Mayor Michael Bloomberg.
The decision to return to work on Wednesday, February 20 followed a letter signed by all five Democratic contenders for this year's mayoral election promising to "revisit" the issue of job protection for the drivers if they take office. This was the key issue in the strike--Bloomberg's decision to remove an "Employee Protection Provision" (EPP) from bidding requirements for bus company contracts with the city, under which the companies must give priority to experienced union drivers.
In its statement announcing the decision to suspend the strike, Local 1181 officials said the pledge means there is a prospect of preserving EPP for contracts awarded after the new mayor takes office. But it obviously won't prevent the outgoing Bloomberg administration from stripping EPP from the agreements for about 20 percent of covered bus routes when these contracts expire on June 30. Union leaders say they saw no viable alternative to settling for the hope of better treatment from the next mayor.
Striking members would have had a very difficult time enduring a longer strike. A driver at top pay earns about $44,000 a year, and attendants (traditionally referred to as "matrons") earn less than $30,000--both well below the median household income for the city. Strike pay was averaging $150 to $300 per week, and the workers' health insurance ran out on February 1.
It's a testament to the solidarity and determination of the strikers that they held out as long as they did against a Bloomberg administration that was determined to bust their union.
But there were also missed opportunities and flaws in the union's strategy--above all, the reliance on finding a government official willing to negotiate, which Bloomberg was not. That strategy worked for Local 1181 in the past--most notably in the three-month strike in 1979 that resulted in EPP becoming part of the city's contract requirements in the first place.
Union leaders are putting their faith in a Democratic mayor to replicate that success. Support for the bus drivers--in spite of Bloomberg's propaganda campaign against them--ran high enough to force the Democratic mayoral contenders to promise their support. But the Democrats have proven that they can't be trusted to honor such pledges--not least in the new age of austerity, in which Democratic mayors and city legislators have overseen some of the harshest attacks on workers.
- - - - - - - - - - - - - - - -
SINCE THE 1979 strike, the New York public schools have come under "mayoral control." Bloomberg appoints a chancellor and calls the shots as to budget, policy and priorities. The current chancellor is a former deputy mayor, and his immediate predecessors were a business executive and two lawyers. Thus, unlike during the 1979 strike, the union was facing a City Hall where the mayor held a lot more power.
Bloomberg presented various rationales for removing EPP, none of which held up under examination. He claimed the EPP was illegal, citing a 2011 appeals court decision striking it down as a requirement in preschool contracts. What the decision actually said was that the city hadn't presented evidence to justify the requirement in terms of safety and quality. That's because lawyers for the city failed to present a study commissioned in the 1990s which showed conclusively that the EPP, by prioritizing experienced personnel, promoted safe transportation of schoolchildren. The city could have justified the EPP against future challenges--but that wasn't part of Bloomberg's plan.
Bloomberg justified his refusal to even negotiate by claiming that since the city didn't directly employ bus personnel, it wasn't a party to the strike. This was rejected by the National Labor Relations Board (NLRB), which found that the city and the bus companies were both "primary employers" of the striking workers. The mayor simply ignored the NLRB finding.
Bloomberg also justified the city's position by citing the even rising cost of transportation since the EPP was included in bid requirements. The union challenged the claim that the EPP was responsible for increased costs, but Bloomberg benefited from the fact that the mainstream media wasn't interested in subjecting his claims to even the most basic scrutiny.
EPP is an essential issue for a group of workers that is subject to seasonal layoffs and changes in routing or route assignment. Forcing experienced personnel to compete against brand new drivers and attendants would inevitably drive down wages and benefits. Contractors will squeeze their workforce to increase profits and lower their bids to the city.
Despite the odds against them, the strikers fought an uphill battle. One driver, James, stood by the picket location next to Department of Education headquarters after the decision to suspend the strike was being reported, but before it was made official. Asked how he felt about it, he said:


We need to be working, but we also needed to tell people what's going on. We're professionals. If you put your kid on my bus, I care about getting him there safely. It's not just about driving, it's what's going on in the bus. I wish Bloomberg could ride the bus for a day and deal with what's going on with the kids. He might understand what having real professionals means.

The use of the word "professional" is striking--it's common among the workers. City governments often make distinctions between professional and non-professional job titles, referring to differences in credentials and status. When drivers and attendants use the term, however, they're talking about their dedication to doing the job well. One parent, Lissette, used the same word in supporting the strikers:


I always worried about my special ed kid, but it turned out my other son was having problems on the bus. The driver told me he maybe had trouble making friends, and that's why he was acting up. That driver talked to him, and made him more comfortable, and there hasn't been any problem since. He was so professional, and that's why I support these guys no matter what.

Among the successes achieved by strikers is solidarity from Parents to Improve School Transportation (PIST), as well as other unorganized parents who understand the value of the service their children receives better than the Bloomberg administration. There was also a belated expression of support from the United Federation of Teachers, the New York City teachers' union, adopted after pressure from members who understand the attack on bus workers is part of a larger attack on public schools.
Still, the union didn't do enough to build public support, even though it knew a strike was nearly inevitable since the city made a decision to abandon EPP in mid-2011. The bus workers had allies like PIST, but made little effort to use that base to galvanize wider parent support. The Department of Education, meanwhile, sent union-bashing propaganda home in children's bookbags, including the false claim that the union was planning to walk off the job in the middle of a school day.
Instead, Local 1181 adhered to a traditional model of seeking to get the city to the negotiating table through pressure on elected officials. While parent support was welcomed, the union apparently did little to seek it out, nor to win support from educators.
It's unfortunate that Local 1181 didn't reach out to the Movement Of Rank-and-file Educators (MORE) within the UFT. MORE was eventually able to push the UFT to publicly support the bus workers in the strike's waning days, but perhaps more could have been accomplished with a bus worker-parent-teacher alliance built well before the strike.
The bus workers would still have faced an uphill struggle against an intransigent mayor with near-absolute power. And while it had the power to disrupt school transportation, the strikers lacked the power to shut down the school system--as the Chicago teachers did in their nine-day strike last fall. So there is no guarantee that they could have one--but a strategy based on broad mobilization would have held out more promise.
- - - - - - - - - - - - - - - -
BEYOND THE immediate struggle, the school bus workers' walkout cast a spotlight once again on how New York City has become increasingly divided between those at the top, who benefit from the neoliberal agenda, and the vast majority. New York City, after all, leads the nation in income inequality.
Poverty in the city is roughly double the national rate, increasing by 50 percent between 1975 and 2005. It is increasingly associated with working people, too--in 2005, the Community Service Society found that 86 percent of households in poverty included one or more member who is employed. Meanwhile, the rich got richer--in Manhattan, inequality between the top 20 percent and the bottom 20 percent increased by about 250 percent between 1980 and 2005.
In this setting, it's essential for unions and activists to rally behind Local 1181's efforts to save EPP--and to make the pledge by some political leaders to revisit the issue translate into real support for workers. Local 1181 has lots of company, as "waiting out Mayor Bloomberg" has become the preferred strategy for municipal unions, most of which have been working without a contract for years.
No one should be confident that a Democratic mayor will be an improvement over Bloomberg. It was a Democratic governor who vetoed legislation that would have authorized EPP for the bus workers, and who created a new, lower-cost pension tier for public-sector workers. New York City Democrats have often found it expedient to support the mayor's agenda. If there is to be a change in priorities under the next mayor, it will require a mobilization among workers.
The schools can be a special focus of resistance because they have been subject to an intense and sustained attack by the forces of neoliberalism. Absolute mayoral control, perpetual reorganization, wholesale school closures, privatization and attacks on all parts of the educational workforce are linked by the goal of transforming the public school system into a privatized system to prepare students for working poverty.
Victory in any of these struggles will strengthen resistance in all other aspects of the struggle to save public education.
Article is from : http://socialistworker.org/2013/02/19/bitter-defeat-for-bus-drivers
Posted by Al M at 7:07 PM