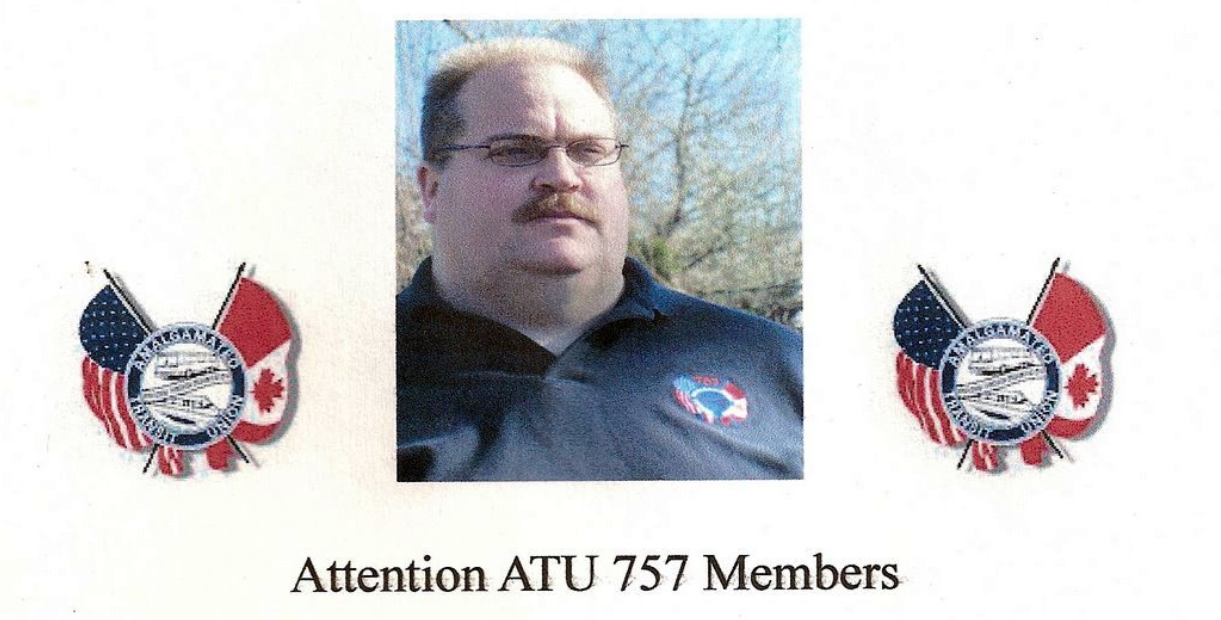 Today, the Oregon Secretary of State’s Office released its TriMet Audit Report to the public. TriMet’s front line employees and their union, ATU 757, are grateful to the legislators who called for the audit and to the Secretary of State who supported conducting it. The audit presented an historical opportunity to get to the heart of the critical issues that brought the agency’s performance to the attention of state lawmakers. Upon initial review, it appears that opportunity has, unfortunately, fallen short of its potential.
“I think the disclaimer on the front page says it all,” said ATU president Bruce Hansen. “It reads: ‘...due to the large scope of the request and the short time frame, we could not fully develop and verify our findings.’
The Union had an initial meeting with the auditors and provided them with a detailed list of 25 documented concerns our members had regarding safety, service and sustainability. There was no follow up, and not one of those issues is addressed in the audit report.” A list of those ignored issues is attached.

In accordance with generally accepted government auditing standards, the agency being audited is the primary source of information. As a consequence, the audit report does a comprehensive job of conveying TriMet’s official line on the causes of its problems. It also highlights the many initiatives, task forces and committees the agency has established. The report, however, fails to evaluate the real life effectiveness of those activities to date. “Highly paid managers are constantly attending meetings. Yet, the people on the frontline seldom see any positive outcomes to justify the time and money being spent on going to meetings,” Hansen noted.
“When I finished reading the report, I felt pretty disheartened,” admitted Hansen. “The auditors just seem to be in lock-step with TriMet on every key issue. I’m not sure, at this point, how our members are going to feel. Many of them took a real risk in talking with auditors conducting workplace interviews. These folks are going to see that their voices have been completely ignored. In general, the message seems to be TriMet management is doing a terrific job, they just aren't telling the workers about it.”
Hansen also expressed concern over recommendations made in the report. “The fact that the auditors rendered opinions on bargaining proposals is extremely unsettling,” he declared. “Considering that we are in the midst of complex contract negotiations, the auditors’ one-sided approach, where TriMet’s bargaining positions are simply parroted, is neither helpful nor fair.”
“At the end of the day,” he concluded, “workers with 25 and 30 years on the job say they have never seen the workplace culture at TriMet more toxic than it is now. Nor have they seen the interests of the passengers and taxpayers so disregarded. We sincerely had hoped that the audit was going to be the catalyst to start turning that situation around.”
Citing a bright spot among the findings, Hansen points to declines in the number of bus collisions, reports of drivers nodding off and overtime pay since the Union and management came up with a policy requiring at least 10 hours off between shifts for drivers.
“Clearly, the progress on the hours of service policy is evidence that serious issues can be effectively addressed when TriMet managers are given the authority to partner with the Union to find solutions,” says Hansen. “The Union has demonstrated our willingness to tackle the problems constructively. Hopefully, the audit will encourage more meaningful and respectful partnering in the future.” 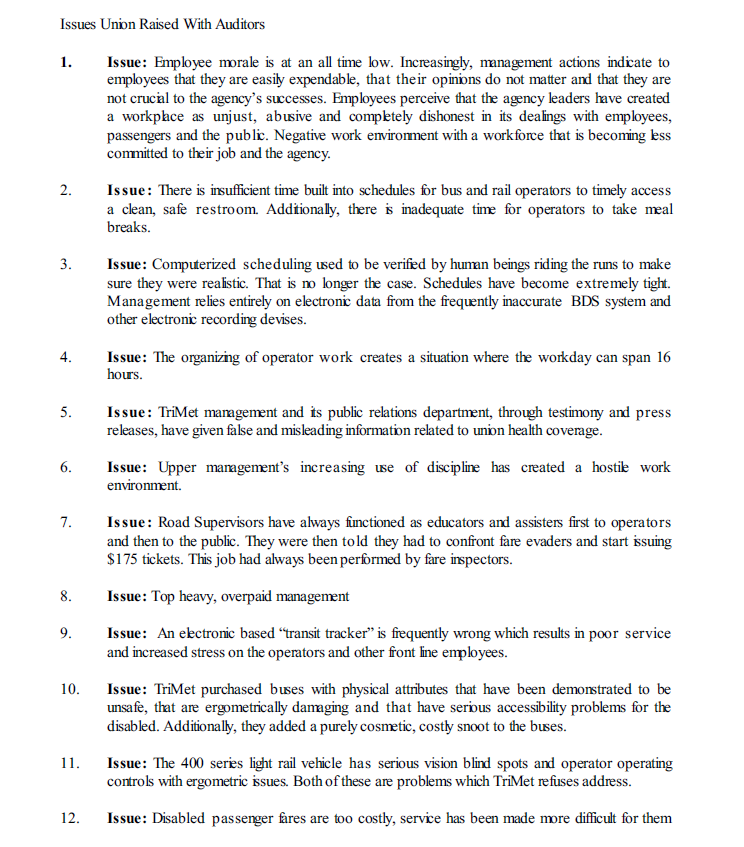 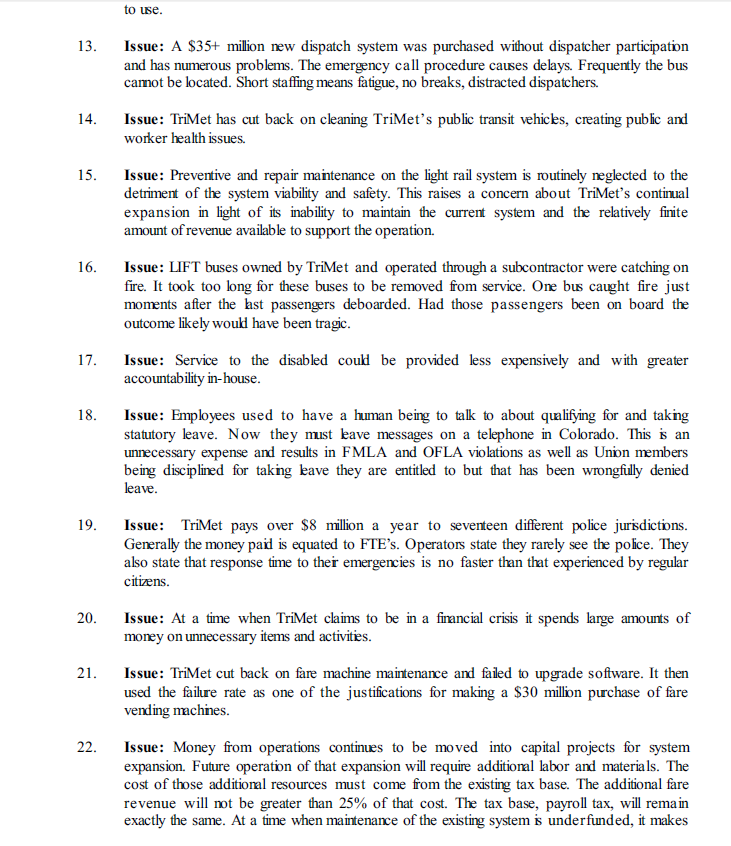 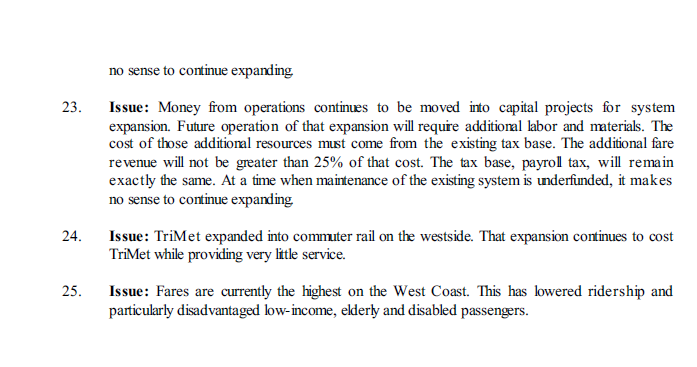 Bruce got it right