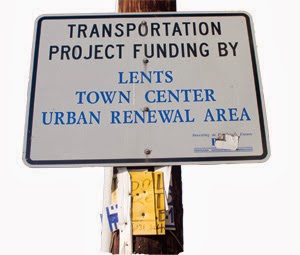 This is an astounding read ........It's Fail, Fail and more Fail followed by more failure.   The Portland way. Is it any wonder the people of Clackamas County, Clark County and now the SW Corridor are rejecting Portland's Metro plans?  The same plan has been attacking every community in the region.  Click for the whole story and pics.  Not a word about the MAX Station at Foster Rd. So sad.

The city poured $96 million into reviving Lents. Where’s the rebirth of this East Portland neighborhood?


PILES OF PLANS: The city of Portland has spent $3.5 million on planning for a proposed Lents Town Center. Copies of the studies are shown here on one of the empty lots in the neighborhood’s business district.
IMAGE: WW Staff
THE COCKROACH PLAZA: City officials, including Commissioner Steve Novick, held a ribbon-cutting in July 2013 for this plaza in front of A&A Pest Control, part of a series of streetscape improvements.
IMAGE: Inger Klekacz
ARARAT BAKERY: The PDC’s $2.6 million sidewalk improvement project includes the corner of Southeast 92nd Avenue and Ramona Street—where the Ararat Bakery (left) closed in 2011 after the city spent $3.2 million to move the business here.
IMAGE: Inger Klekacz
LENTS LITTLE LEAGUE: The city moved Little League diamonds off this 3.5-acre lot in 2009 at a cost of more than $900,000—then dropped plans to develop apartments here.
IMAGE: Bethlayne Hansen

....PDC bought up land, paid for housing and covered the cost of roads and sidewalk repairs. But it has also frittered away millions on redevelopment plans no one wants to build, relocating businesses that failed, spiffing up a no-tell motel, and building a forlorn, unused plaza in front of a pest-control company.

The PDC spent $10.3 million to eliminate what it considers “blight” by buying up older buildings and clearing the lots. It’s called land banking, allowing the city to have more control over future development.
As a result, the city has become the biggest single landlord in the business district, owning 40 percent of property in what’s supposed to be the new heart of Lents, and the properties go off the tax rolls while the city waits.

I was reading this a bit earlier, and it is something else - that one guy reminded me of Randy Leonard: "I'd do it all again" (even though he's got nothing to show for it). And of course Sammy had a streetcar falling out of the sky and magically appearing in Lents. These guys are nuts.

The "I'd do it all again" was in response to building sidewalks, which are good in any case:

Quinton says the investments in streets and sidewalks were successful whether they attracted business or not.

“People care a lot about sidewalks in East Portland,” he says. “If we had the money, I would do those over and over again.”