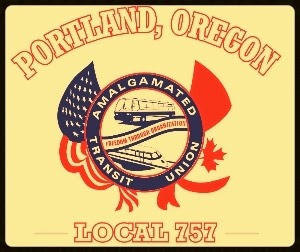 It appears that Trimet has 'dropped' some of its demands before presenting its final offer for arbitration. ATU is reading this as some sort of victory but anyone familiar with negotiations knows that the parties always come in with extreme demands so they have room to bargain.

The issue with Trimet has always been the health care, they want to eliminate it. They have already won one arbitration but that was not enough for them, they want more. And if they win this next arbitration they will most likely come back at the end of the next contract and demand even more.

Double Dipping Dave Auxier has stated publicly (recorded on this blog) that Trimet seeks to END THE 'OPEB' BENEFIT. Luckily for union employees Trimet cutthroats won't be able to get rid of it completely because they would have to get rid of their own healthcare also.  Trimet executives  certainly won't allow themselves to suffer, its just OK for everyone else to suffer.

Trimet and its corporate media stooges have waged an unrelenting war of disinformation against its union employees going on 5 years now. While it has been accepted as gospel by the anti union crowd as well as the  church of light rail cultists much of the general population are suspicious of Trimet claims  having seen for themselves how often Trimet officials lie and distort to manipulate public opinion.


When the parties left the last mediation session on May 8th, TriMet still had over 70 takeaways on the table. On May 13th, Randy Stedman declared impasse. Ironically, he did it while we were in our first meeting with TriMet’s actuaries about TriMet’s 44-years of not funding its retire health insurance obligation (OPEB). It took the Union a full eight months to get permission to have that meeting.

The unfunded OPEB obligation is the reason TriMet gives when demanding lower health insurance benefits. It has been so key to the negotiations that, on Wednesday May 21st, the Union filed an unfair labor practice complaint against TriMet. There are four allegations in the complaint with the first one being Stedman’s declaration of impasse after nine month of refusing to permit the Union access to the OPEB information.

But there is good news. TriMet’s final offer submission to the Employment Relations Board abandons almost every one of its take way proposals. TriMet has left only a handful on the table. These include active and retiree health insurance, apprentice hiring from the outside, and limitations on entering apprentice programs among others.

I want to talk briefly about health insurance. TriMet’s proposal for active employees is worse than the insurance provided other public employees in the Portland metro area. That’s a fact.

TriMet’s change in position is a vast improvement. Though it is hard not to scratch your head and wonder why TriMet ever put over 400 contract changes on the table in the first place. Bottom line, your elected property officers stood firm and finally, nine months later, we’ve seen the employer move in the direction of reasonableness. Now the parties can focus on the health care issue.