Listening to all the hype coming from Trimet and GlobeSherpa you'd think that the cell phone app was the greatest invention since sliced bread. It just ain't so.
Don't give up your paper tickets yet
(and don't give up your car yet either) 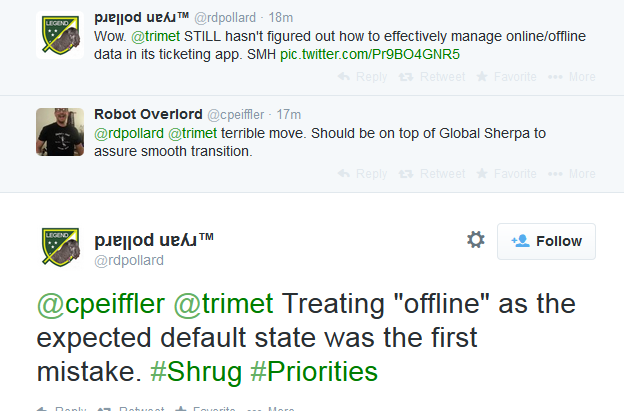 @Trimet your "notification" of OS8 issues w/app is a bit shady. So all the $$ customers lost, because "we warned you" is totally lost. #FAIL
— Miss Nemmesis (@MissNemmesis) September 24, 2014

@trimet pretty shady guys! You wait a WEEK after iOS update to inform us we lost our tickets. Enjoy all that free cash guise @Oregonian
— Derek Gannon (@M1k351x) September 24, 2014

@reggieaqui @thesquare 100% agree. @trimet is irresponsible and incompetent. They should be refunded for lost passes (@globesherpa)
— Jeff Katz (@katzpdx) September 24, 2014

Hey, uhhh, @trimet. I just got your email about switching to iOS 8. About 4 days too late. Seriously? #pdxtraffic
— Ben McLeod (@bentonmcleod) September 23, 2014

It's not TriMet, it's GlobeSherpa. I hate to call out a local startup, but fuck. this. app.

I saw the founder talk at TechFestNW this summer. He put up a slide of a passenger struggling to use the kiosk and someone on a smart phone happily walking onto the train. This app is way more convenient than that old, dated method! Right?

I've had more problems using this app than its solved.

Ticket purchases are instantaneous. You can't buy a ticket on your walk to the train and expect to use it.
Get a new phone? Need to wipe your old one and reinstall the app? Your tickets disappear and you have to go through a manual process.
Minimum purchase of $5. Tickets are $2.50.

I love that this app saves TriMet money, but if people use the kiosk because it's easier and more reliable than the app, it's not really saving TriMet money.
Thanks for the heads up TriMet. A GODDAMN WEEK LATER. : Portland

Just wait until GlobeSherpa/TriMet get hit with a ton of chargebacks as consumers dispute the charges to the bank.