Interview with Jeff Ackerson about the latest contract 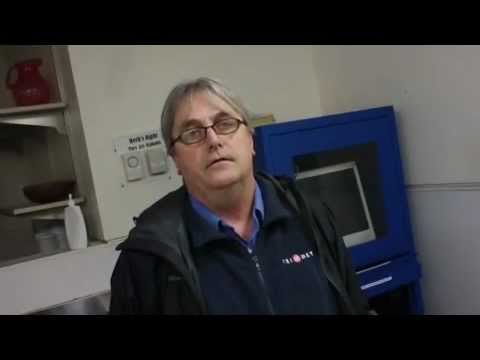 I talked with Jeff about the process involved with the contract deal. I admit I flew off the handle when the deal was reached because I (like everyone else) had no idea that they were even close to a deal.
I also admit that I have no 'inside' information about the process that went down in reaching this agreement. From where I sit I saw it as total capitulation giving Mcfarlane his crowning achievement, the union contract he wanted when he took over as general manager.

So Jeff has taken it upon himself to attempt to educate me further on the details of the contract and why things are the way they are.

This interview has been edited

Al: So Jeff, can you give me any background as to events that lead up to this contract?

Jeff: Of course I can try my best. We will go back before Bruce became president of the union. When e-board members are elected they become part of the bargaining team, that is one of their major functions.
When Jon Hunt was president we had a negotiating session at the Hilton Hotel and all of us (e-board members) where shuttled into this little room.
What ends up happening is that Jon and Ron (Heintzman) are the only two people that end up in the negotiation.
Jon and Ron go into the room with the Trimet people and within 5 minutes they both come out of the room and  Ron has Jon by the arm trying to calm him down.
Ron says to Jon that 'we are not going to get anything done if you don't calm down'.
Then Ron goes back in by himself and comes out a short time later and that's the end of the talks. Next thing you know guess who gets hired?

Jeff: Randy Stedmen .
So Stedmen gets hired because Neil can't deal with Jon. And Mcfarlane can't figure out what ATU wants and he can't even communicate with us because Jon is being unreasonable.
There was a guy named Paul who did all our meditations and arbitration's for years and as soon as we stopped talking he came out and said to me 'Jeff, this is not good, whenever you get two sides that are not talking anymore this will cause some real heartache for everyone'.
So then Stedmen shows up on the scene, and the board of directors start up with their agenda, then Neil starts up with his agenda.
At this point we have all parties fighting with each other.
Finally we are all going for arbitration we are with Tedesco , I raise my hand at the meeting and ask 'what do they want in order to avoid arbitration'?
What Mcfarlane wanted at the time was an 80/20 plan for everyone across the board.

Al:That's what my understanding was.

Jeff: Exactly. At that time we were going into an election cycle and there was no way Jon was going to put his candidacy on the line .
Jon doesn't take any advice from the lawyers, the officers ,  he disregards the arbitration laws. Tedesco said at the time that 'this is a crap shoot, I'm feeling good about it but bottom line its a gamble'.
Fast forward now we have the Gabba decision.
What follows is  the ULP's , then Trimet appeals the ULPs and then the union appeals the Gabba decision.
There is another election and Bruce becomes the new president.

After Bruce becomes president a dialog opens up between Trimet and the union.
Then we had the Hientzman fiasco and that ballooned out of control.
Heitzman just wouldn't leave no matter what Bruce tried.
Bruce tried to be polite about this but Ron would not have it.
The problem was Jon, he continually insisted that Ron should stay.
Even after the international got involved Ron still wouldn't leave.
Bruce tackled this head on because what was going to happen is that the  dissenting eboard members were going to try to bring the whole mess to the members.
Bruce was trying to do something here and it would never happen with this internal strife happening.

So now lets talk about the 36 mediating sessions.Nothing gets done at these sessions. Finally John Costa comes in and things start moving . Everything changed at that point.

Here is what we (union members) were facing.
1-There was a  whole group of operators hired after 2012, 540 to be precise, and what Trimet wanted to do with that group was put them on the $800/mo stipend health plan with zero post employment health benefits.
At that time Costa breaks a deal with Stedmen and says if you bring the operators that were hired after 2012 and before October 2014 we will put them under the 'new' retirement plan (which is published on my blog).
We then got Trimet to agree to the 95/5 payout on the health care premium charges, which was a huge thing to get them to agree to.
We have an 80/20 plan but Trimet is still paying for 95% of the premium. Even if you have major surgery your out of pocket expenses are not going to be that bad all things considered.

Trimet also wanted to charge current and retired employees 50% of premium charge if we had gone to the arbitration.

Al: That's what I thought was going on, Trimet was strong arming the union threatening huge crippling cuts in the arbitration knowing that its 'winner take all'.

Al: And that's a result of former president Hunt's allowing this no strike arbitration process in the first place (he never asked for member input into that decision)

Jeff: Absolutely! You better believe it, him and Ron made that decision. They really felt this would be the best thing for us. Also the international had a hand in this too.
The international thought this would be the best for union members also.
The part they missed was the 'all of nothing' types of decisions.
The fact that the arbitrator couldn't take bits and pieces from each proposal to craft a fair deal was completely missed.

From my point of view Al I would have to be out of my mind to put you and everyone else that has worked years at this shit hole at risk of losing everything. It just wasn't worth the risk.

And here is the sad part, if we had just agreed to the 80/20 when Jon was president it would have saved us tremendous heartache. Our grievance process would have been saved!  There was a whole bunch of stuff we lost at the Gaba decision that we didn't have to lose!

Al we don't want you to feel slighted or that we are hiding anything from you or anybody in this process.

Al: I don't feel slighted. All I ever wanted from Bruce was for him to write an editorial explaining to the members why we should be ok with this! That's all I ever wanted, a clear concise explanation like the one you are giving me here.
And how can you trust Mcfarlane?
How many examples have we seen of these Trimet executives lying and conning everyone that deals with them.
How do we know that Mcfarlane won't come back in two years and try to cut our throats again?

Jeff: We are all concerned about this.
Somebody asked him a question and he said 'its still kind of expensive but the position we are in now as a transit organization we are in a much better position to bargain on wages and benefits.'

Al I really believe that this was a courageous decision for our group to go forward with this. I really believe we took care of the primary concerns right now as far as the future of Trimet is concerned.

I'm not gonna kid you, we threw all the new employees under the bus. They will get the $800 stipend which probably will be enough to afford Kaiser. The new employees get no extra health insurance for themselves and their spouses in their 'golden years'. We had to throw them under the bus.

Al: I've heard these executives talk at the board meeting about how they intend to cut the OPEB 50% one arbitration at a time.

(Note: I agreed to attend a power point presentation)

Great conversation. I know Jeff and everyone else (minus a certain person) worked very hard NOT to throw anyone "under the bus". But now the problem remains thusly: those new ops will now be angry because they didn't sign up with the expectation of having NOTHING when they retire. What will their actions be as future negotiations ensue? Will they work to throw US under the bus in retaliation for how they've been treated?

My hat is off to the negotiating team. Current trends are strongly anti-union, and any headway they made was laudable. However, we need to work toward fairness for EVERY operator (and retiree) who sacrifices his/her body for the good of the people in our district. We all know the executives with their inflated "Cadillac Benefits" will continue to chip away until we're left with nothing, unless we continue the good fight.

The contract ain't perfect, but it took a lot of work to keep the district from permanently disabling our benefits. We need to work hard at bringing solidarity to our union and move away from the senseless infighting.

Divide and conquer... that's the prevailing tactic. Time to shore up the membership and heal the wounds.

I find this interview lopsided at best. I wonder if Jeff remembers he is one of the wage committee members that voted for Ron Heintzman to STAY! Anyway that's what Jeff told me. Jeff is on a personal vendetta to get Jon out of office. Has anyone said that it was Ron and Jon that got the 3.6 million dollars back along with the out of pocket money, this was in progress before Bruce Hansen. Well of course not why would we give credit where credit is due. TriMet was looking for a new Labor person for some time, Randy was negotiating against Mt Hood Community College and that was coming to an end. Randy did a great job cutting benefits there and applied for the job at TriMet and don't think for a minute they aren't coming for more.
No need for him now since we just roll over and take whatever TriMet wants to do to us. Why fight since apparently we shouldn't do that anymore, we should all be afraid and fear what might happen if we open our mouths and stand up for ourselves. The relationship with TriMet has not changed, our members still are being harassed, contracting out at its highest point ever and First Transit just took over some of the bus buying, yep you heard the name First Transit use to be done by union mechanics, not any more. TriMet is walking all over every department, from the "blocking" of routes, to contracting out, to watching members on camera, why? Because they know ATU won't say a damn thing because we "all have to get along" ! what a crock of crap!

We all know the executives with their inflated "Cadillac Benefits"

Your benefits are still better than theirs.

What's the matter with you MAX?
People that sit in offices with 6 figure salaries and you have the nerve to say
"Your benefits are better than theirs?"

Actually the benefits are much worse like the white collar workers are all pension vested in 5 years, blue collar 10 years.

And as far as the medical is concerned, everybody gets the same thing now, office workers get the same as mechanics.

No use in crying over spilled pensions (medical), we just voted it away.
HB