There were several versions of this blog as long time readers may remember. Back when I was employed by the Trimet transit district the managers would go on occasional witch hunts which necessitated my closing one version of this blog and starting a new version. So the 1.5 million views isn't totally accurate since it doesn't include statistics from previous versions of this blog.

In any event this blog has been in existence since late 2010 so it has 5 years of readership for all practical purposes. That translates to about 830 views per day, which is pretty good for an obscure transit blog focusing on Trimet issues. Even though my  blog (and me) has been shunned by all the establishment transit internet networks in the Portland area we still have a loyal readership.

My YouTube channel, which I have had since 2006 has 1.7 million views itself. Most of the material on that channel is Trimet related. 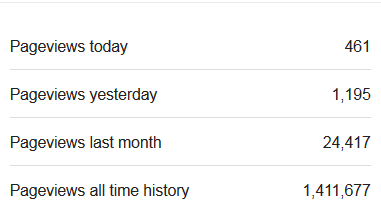