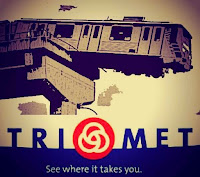 Everyone who uses public transit knows full well that it can be a trying emotionally exhausting endeavor. Here are a sampling of  tweets from people who have been TRIMETIZED by the Portland area transit system knows to the locals as the TRIMESS (trimet). Don't forget to check TRIMETSCANNER for the real low down at Trimet

They took away bike lockers at Center Street. Apparently the person who owns this bike is not happy. pic.twitter.com/tauZ3Jmmto
— AL M (@AlYourPalster) May 21, 2015


WOW. @trimet just gets worse and worse. There better not be any public votes for #trimet transportation costs ever in Portland. Hell no!!
— CPW (@PDXbrother) May 21, 2015


Have seen 7 busses traveling on beaverton-hillsdale highway but not 1 has stopped to get waiting, paying customers. WTF @trimet .
— CPW (@PDXbrother) May 21, 2015


If @TriMet stationed a transit cop at the NW 5th & Burnside stop for just one day, they'd easily fulfill a month's quota of smoking tickets.
— Jonathan Gates (@Gates_Jon) May 21, 2015


Too bad you can't open the windows on #trimet max trains. Also, no farting in small enclosed, spaces.
— Emily Kilber (@erkilber) May 21, 2015


@trimet are you even trying to stick to schedules today, or is it just kind of a free-for-all on the max?
— Brad Bourque (@CmmrBourque) May 21, 2015


I screamed at Trimet's answering machine that this crosswalk sound like rapid fire hell. And I saw you do the same as wallmart. Employees?
— Mary N (@galaxyofwater) May 20, 2015


Cool, bus is running late again. #TriMet needs to get it together. Worst week I've had for public transit in quite some time. #portland
— Robin Yourgrave (@RobinYourgrave) May 20, 2015


Driver of #TriMet bus that hit an illegally parked car has been with the agency for 1 year pic.twitter.com/Ct81EaCqz8
— Ron (@TelemachusRome) May 20, 2015


I'm sorry but this is ridiculous @trimet what about the people trying to get to work and school? pic.twitter.com/IBiLON5GxC
— ♡ ¥UNG HIME ♡ (@lewdhime) May 20, 2015


RT @trimet & let them know not to raise fares on Honored Citizens. We have until 5p.m. Transpiration equals equity! Honor our citizens!
— Street Roots (@StreetRoots) May 19, 2015


I mean what if all the Trimet employees were to strike against their railroading pompous bullies that keep our city clean and broke and hell
— Mary N (@galaxyofwater) May 19, 2015


Been using @trimet extensively for a week. Are the buses always consistently late?
— Viet Hoang (@viethoang) May 19, 2015


FUCK EVERYTHING ABOUT THIS. @trimet's removal of functional bus stops just to spite the homeless was already vile as fuck. @soycamo
— William Gillis (@rechelon) May 19, 2015


@trimet Could we get an update on the blue line to Hillsboro that’s stalled downtown? Max hasn’t moved in 10+ mins.
— Tara D'Angelo (@taradangelo) May 18, 2015


The worst people on the bus are those who listen to music on phones WITHOUT HEADPHONES @ 7am. Go to the Dollar Tree, cheap asshole! #Trimet
— Velocity Girl (@VelocityGrrrl) May 18, 2015


@trimet This is a common occurrence. Are you doing this on purpose?
— ♤Hollywood Ryan♤ (@Hollywood_Ryan) May 18, 2015


@trimet thanks again for another bus leaving early and, as always, the next one is running 12 minutes late. #happymonday
— zoë (@rhymeswithbowie) May 18, 2015