The Trimet live scanner is off the air 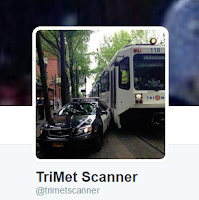 The Trimet scanner was a collaborative effort of two transit bloggers.
Myself and Jason Mchuff.
But  in reality it was a production of Jason's since he did all the engineering work required to make that feed worldwide over the internet.
All I did was provide the computer and the internet connection.
Unfortunately I am being called away and  can no longer host this site.
Jason may or may not find another way to stream the scanner over the internet.
For further information you need to contact Jason himself and the best way to do that is via Twitter @rosecitytransit.

We had three great years and I enjoyed every minute of it.
Nothing lasts forever though.
Trimet supervisors, controllers, dispatchers and everyone else can now relax, you are no longer being recorded!
It's just a shame that Trimet won't pick up such a useful endeavor as the TRIMET SCANNER was.
Posted by Al M at 7:13 PM