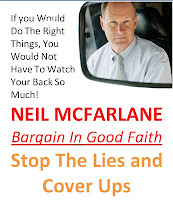 This essay originally appeared at From the Driver's side Blog
Bouncing around in a Gillig seat gives one ample chances to wax mischievous. As the aches give way to pains in this half-century-plus body, I get a bit ornery . Balancing everyday bills while trying to plan for a not-too-distant retirement, the antics of management creep into the mix and, well, I get a little pissed off.


Living through my first union contract negotiation was educational. Our management, having reneged on its promise to fund decades of retirement obligations, refused to take responsibility. Instead, it embarked on a public relations campaign designed to convince the public we are overpaid gluttons greedy for more than our share. The corporate-owned media loved using the term "Cadillac" to describe our 1977 Buick benefits. We gave up more than they did, so our GM was given a raise and a pat on the back, after he finished his own evaluation! I found this insulting, especially considering our "raise" is eaten up in the higher co-pays and premiums we have to pay now.

Meanwhile, our GM enjoys a six-figure salary and a golden egg awaits him when he leaves his ivory tower: a $200,000/yearly pension and free health care for life. Really? For what? While we sweated negotiations, news reports focused on a few drivers who had the gall to earn $100,000 in one year, in an effort to make us appear over-paid. Well lemme tell ya, if an operator takes in a hundred G's over 12 months, he or she certainly earned it through excruciatingly long hours in a poorly-designed seat.

To be somewhat fair, I'm sure a GM's job is fraught with its own dangers and annoyances. However, our job is more physically demanding, and comes with one of the highest rates of poor health for a profession. When you consider what an operator's (or mechanic's, for that matter) body goes through in a typical career, it's highly insulting for us to have to pay for our health insurance out of whatever pittance of a retirement we're able to limp away with after a career being bounced around like a rag doll.

We have union elections this month, and I have an idea for our leadership when contract negotiations begin again later this year. Those long hours in the seat found me fantasizing about what would happen if my fellow operators and mechanics were in charge of remodeling our GM's job requirements, office design and benefits package. Several of my brothers and sisters agree this would be a grand idea! Here's the recommendations of the unofficial, ad-hoc committee of tired-of-being-insulted operators.

Prior to running the show, Mr. GM must successfully complete the bus training program. His salary will be identical to his classmates', ditto the benefits. If the trainer doesn't think he can cut it, he's "let go" just the same as anyone else would be. He must pass each exam and obtain his Commercial Driver's License, subject to the laws we all must obey. Also, he must be line trained and become a mini-run operator for the duration of his six-month probation. If he were to graduate with his sanity intact, only then would he be able to assume the duties of GM.

Each year, he must perform six weeks of in-service bus operation on all of these lines: 4, 12, 20, 33, 57, 71, 72 and 75. His starting times will fluctuate from 4:00 a.m., getting later every day until he is working nights, then back to a report time of 3:00 a.m. at the beginning of his work week. He will be allowed no more than two Preventable Accidents; any more and he is fired and forfeits any district benefits. After his in-service work is complete, he must spend one weekend day a month scrubbing the interior of buses for 10 hours, at the going rate paid to those who currently do this job.

Each month, he must meet with operators to discuss working conditions. He is subject to random drug and alcohol screenings, and must carry a valid medical certificate.

His cushy executive office chair is replaced with a bus operator's seat from a retired 1600-series bus for a period of one year. It is mounted to the floor, and while at his desk, Mr. GM must be seat-belted at all times. It will bounce, jar him sideways and vibrate. If he complains of back pain, a doctor will refuse his claim by saying either he had an injury from an earlier job, or that he stabbed himself and is denied benefits. He cannot leave the seat for over two hours at a stretch. When he gets to a break, it will be eight minutes, then it's back to the seat.

All day long, diesel fumes will be pumped into his air conditioning vents. Transit riders will have 45 minutes a day to stream into his office and lodge phony complaints about him. Four times a year he will be subjected to random attacks without benefit of protection.

When riding transit, he will be required to wear a special orange vest with "BOSS" written across it.

His salary will be reduced to $150,000 a year, including the paltry wages he was paid as a trainee or operator. No bonuses will be granted to him, unless the same amount is passed along to every union employee. Upon retirement, he will have the same benefits as provided in the most recent contract.

Vacations will be accrued identically to a regular operator's, and he cannot have any more "lost time" than an operator. Whatever the least-senior drivers have in the way of benefits is what he has. He is allowed only as much vacation as his seniority allows, just like everyone else.

He has to lose those fancy corporate suits, replaced with uniforms of orange plaid, made of heavy wool and worn year-round. Any time he is caught out of uniform, he is sent home without pay.

The board shall consist of five people elected at large by the public it serves, plus one retired and one current union employee. Each time one of them utters the term "Cadillac benefits", an electric shock will course through all the 'elected' bodies until an apology is heard.

Hey, it could be worse.

Making the rounds in the bullpen the other morning, I put this topic out for discussion. Mr. GM, your employees are much more generous than I have been here. A few sympathized with our "upstairs" relations, going so far as suggesting we trade places with non-union employees so we can have a better idea what they go through. However, I've been on "that side" of corporate America, and I can tell you this job is infinitely tougher on mind, body and soul than theirs are.

We hear often from management as to how much they "appreciate" us. They pick a chosen few to get recognized for their accomplishments, and lavish praise upon them. That's great! Many of our operators deserve this, along with many others. It's good for morale. Yet this seems all for naught when contract terms are released and we see how much disdain top management truly has for us. To give our GM free insurance for life when he retires, yet nothing for new hires when their bodies are used up and disabled is just plain insulting.

So Mr. GM, while you're in training and in-service, one or more of us will take over for you. Perhaps if we trade roles on occasion, we'd narrow the gap in mutual respect for each other. Until then, please don't patronize us by saying you "appreciate" what we do. Because sir, you truly haven't a clue.