Someday Portland may grow up

Portland Fails To Clear Snow and Ice: Seattle SDOT Comes to the Rescue

After a major snow event earlier this week, with 6-15 inches over metropolitan Portland, primary and secondary roads are still in bad shape around Portland.  A few ODOT cam shots illustrate what I mean (click on them to expand): 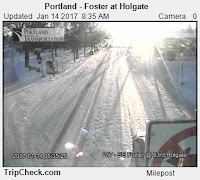 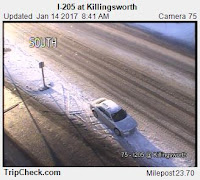 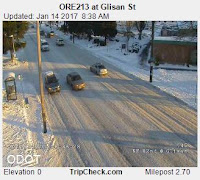 It appears that the Portland road folks (PBOT), have followed the ineffective snow removal approach of Seattle's past mayor Greg Nickels, who lost his job because Seattle was unnecessarily crippled for over a week by impassable, rutted roads covered with ice.   Specifically, they did little pre-treatment before the storm and importantly did not use salt.   And Portland did not have enough equipment (only five decing trucks for example) and had to appeal to Seattle for help.

Seattle learned the hard way in 2008 that salt is really useful, particularly as a pre-treatment of roadway surfaces.  It can melt light snowfalls and prevents the development of a bonded ice layer for heavier snow...thus, making it easier to plow off.  If you want to view a very amusing analysis of the impacts of Seattle's reluctance to use salt and the positive effects of applying it, check out these videos by the "salt guru."