I know that most people that actually take the time to read my material already know that whatever comes out of Trimet public relations in the form of a press release or "fact check" is nothing but propaganda.
There is no objective point of view when reading Trimet produced material, its all self serving. (it's not Trimet alone that does this, every governmental agency functions exactly as a corporate entity pushing their "brand". They never allow points of view that make them look bad)

I would also think that most people have figured out that mainstream media is really the "fake news" although they go to extraordinary lengths to justify themselves.
The last election exposed them for who they are, people pushing the agenda of the power brokers and really have no clue as to what average Americans are thinking.
The same is true here in Portland.


Has there even been one mainstream news story on it?
NOPE!
Why is that?

The obvious answer is that Trimet officials are putting the kibosh on it.
They don't want it covered because it makes them look bad.
Every time I brought it up to Eliot Njus he came up with some lame reason as to why he wouldn't cover it.

Now we have Trimet officials using "our" class action as a "fact check" against "our" union.

Lets take a look at it.
Split-Shift Travel Time

"Claims in the lawsuit included whether split-shift travel time should be paid time."

That happens to be true but if you read the full text of the "fact check" you will not find any reference to other claims, such as paying drivers $4 to get to a road relief that takes an hour or more to get to.
Not one mention of the other issues involved with the law suit are mentioned. 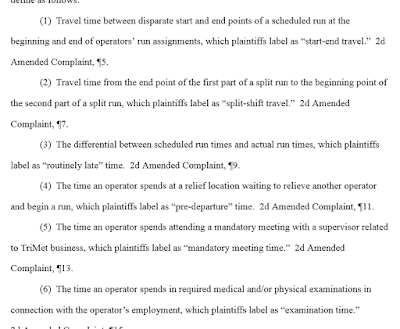 FAKE NEWS because they are only selecting the part of the law suit they want the public to see.

If you continue reading you will see the usual "ATU is preventing us from doing the right thing" blah blah blah including this little gem:

This is fascinating because you would think if an allegation like that is true Trimet would attach the official document backing up that claim.
They have fastidiously provided links to all the other documents which the union provided Trimet concerning this issue but the most important allegation has no link to any document supporting that the allegation was actually made.

All of Trimet's "fact checks" are nothing but self serving pro Trimet propaganda.
There are only 'facts' that Trimet wants you to see, all other 'facts' are removed from the body of their fake news.

The title of the class action is even missing!
What kind of place leaves that out of the narrative?

ITS HOW THEY ROLL