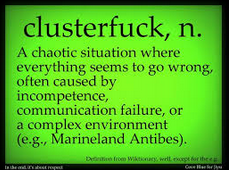 And its the same old story.
For someone like me its just business as usual, a total CLUSTERFUCK!
Using public transportation during these severe weather events is always risky, sometimes you get there in a timely manner other times you are stranded for hours in the elements.
The problem really is that the transit district lies about what's really going on.
They refuse to be honest in these situations.
Its the same story EVERY SINGLE TIME.
Nothing changes because the public is conditioned to accept crappy public transportation

@Pickle_Giraffe I was stuck trying to get home for three hours 12/23/2015. There was no communication from TriMet.
— Nonpartisan (@nonpartisantoo) January 9, 2017

@Pickle_Giraffe It's disingenous of them to tell its customers that MAX can work around snow and ice when, quite frankly, it can't.
— Nonpartisan (@nonpartisantoo) January 9, 2017

@trimet Any idea when the next orange to Milwaukie will hit Pioneer Square South? Lots of people waiting and the arrival board is useless.
— (((Cycling Stashe))) (@Topher423) January 9, 2017

Yo, #Trimet, unless you're shipping the trains to some secret beyond, what's say you send a blue line eastbound?
— Conifers & Citrus (@JeffBull5) January 9, 2017

@trimet one of your drivers just lied to me. 96 came on snow route, said bus behind him was on normal route. Not true. Thoughts on why? BS!
— Jack Armstrong (@ArmstJack) January 9, 2017

@trimet might be helpful if bus drivers actually stopped at the bus stop. 99 just drove right past me at Tacoma. Thanks
— Ashley Kennedy (@MsAshleyNoelle) January 9, 2017

@trimet west bound red line at goose hollow changed to blue at sunset. No indication before hand. Multiple riders did not get on b/c (1/2)
— Groffin Eliot (@xgriffin420x) January 9, 2017

'I see a lot of people waiting for the max, is there anybody to tell them they are in the wrong place'

So many fails @trimet. In almost an hour you have not sent a single shuttle to the airport.
— kristie (@kleeboles) January 9, 2017

Nothing further needs to be said

TriMet, you ARE the alternative😀. In other words, "People, take the bus." https://t.co/GYBMOWfZKt
— Jeanelle Jae Coleman (@jaecoleman) January 9, 2017

We will spend $2B+ on new, and quite perfect, light rail to Tigard.Some will get rich, many will be late for work, some will die:How We Roll https://t.co/Y8ni5Qd6LB
— Nihilist TriMet (@NihilistTriMet) January 9, 2017

Well, @trimet
Yet another $30 cab ride just to get home from work because a some ice shuts down your whole operation.
— Taylor (@Relicmouth) January 9, 2017

@trimet is the green line gonna work or nah? I've been waiting outside for an hour in clackamas trying to get back home.
— God's hands (@JLuyamba) January 9, 2017

Another shuttle driver that doesn't know what to do https://t.co/wunNZEULzz
— AL M (@AlYourPalster) January 9, 2017

Blue Max line at Gateway Transit Center currently out of service due to ice on the overhead wire, according to @trimet #LiveOnK2 pic.twitter.com/O5dIA036t4
— Catherine Van (@cat08van) January 9, 2017

Feel 4 @trimet whose best guess for where their trains are during a winter storm is like "here are the schedules. the schedules are wrong."
— yr father figure (@suzettesmith) January 9, 2017

@trimet it would have taken me 20 minutes to walk home but the ticket kept saying both the blue and red lines were coming and never did.
— SCARLIP🍭P (@scarlipop) January 9, 2017

Train has no power

@trimet my friend is stranded in SE Portland bc lift service was canceled; didn’t even get a call
— David Bouchard (@dsbouchard) January 8, 2017