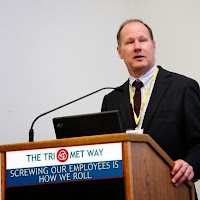 Why won't freaking Mcfarlane leave already?
The greedy self righteous sonofabitch just won't leave.
I'm sure he's banked well over a million tax payer dollars into his personal account
He'll  get  a check for around another $200,000 the day he retires.
Then he will get a lifetime tax payer funded pension of around $15,000 a month.

Neil has also been a miserable failure in keeping the transit system rolling.
Transit ridership in Portland keeps going down under his watch

Time for a change.
Get somebody in there that has some heart towards the people doing the work and the people riding the system.