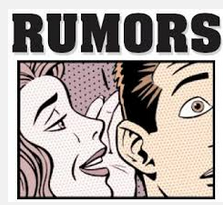 I guess its not a rumor, A driver was arrested by the FBI and homeland security and is facing 10 years in prison.
The driver is one of the people in the story below:

PORTLAND, Ore. (KOIN 6) — Eight people were indicted by a federal grand jury on money laundering charges in a ongoing enterprise that included gambling and drugs.

Federal court documents obtained by KOIN 6 News reveal that around April 2014 the group was involved in an illegal gambling business.

How it allegedly worked

— The bookies were taking bets from customers over the phone, in person and online using the gambling website VNBets.com

— Vo and the other suspects, who have been identified as “bookies,” would charge and collect a percentage fee for each bet placed and the amount would vary based on the gambler’s wager.

— Prosecutors claim the illegal gambling group would collect the losses from customers on a weekly basis. The proceeds from the gambling operation would be put in bank accounts.

— Court documents state Vo and Vinh Tuong Nguyen would use the illegal gambling proceeds to operate their business, Lava Café, in Portland. Officials said the business is where some of the bookies would meet to place bets and drop off and pick up currency.

— Kiet Anh Vo and Vinh Tuong Nguyen would purchase bulk marijuana from wholesale distributors on the West Coast and then ship quantities to locations in Tennessee and North Carolina.

— Nguyen reportedly possessed $69,785 in proceeds from the illegal distribution of marijuana when he arrived on a flight from North Carolina to Portland, court documents state.

Kieth Anh Vo is accused of financing, managing, supervising and directing the gambling business that “violated the laws of the State of Oregon.” According to prosecutors, the operation involved multiple sub-agents or “bookies.”

Gerri Badden, a spokesperson for the United States Attorney’s Office, said all of the suspects will be making their first court appearances Wednesday afternoon.
Posted by Al M at 12:33 PM

What about training sup. Who got a dui