THE RECENT HISTORY AND FAILURES OF ATU757 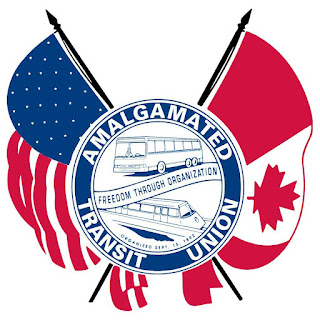 Written by a current member of our union (yes I am a dues paying member, I did not write this)

John Hunt “The loudmouth” His direct actions are why I am here. The general manager can’t stand him, and the board of directors want him humbled. We need to proceed with caution because he can rally his membership and we do not workers resisting our 10-year plan. First order of business: • fire Peggy Hanson • limit the ceiling on which a union member can attain • cut/consolidate benefits in the CBA looking at the loudmouth and his outbursts at the board of directors’ meetings are laughable at best. It seems that he is playing to his membership instead of challenging our policies. The ten-year plan should be relatively easy because the loudmouth was instrumental in getting rid of a unions greatest power of withholding labor in favor of binding arbitration. Looking over the CBA, there is old language that has not been updated in decades, which should benefit us in arbitration.

The loudmouth thinks he is equal to the general manager, but we will cut off all communications with the general manager. All communications will go through labor relations. It seems he is now upset at our move; this move has had a direct impact. His crowds are getting smaller and smaller at the board of directors’ meetings, his perception of power has been reduced to that of a court jester. We recently sent over a MOA concerning changing the old CSI program in favor of the service improvement process. He did not respond to our requests, so we are now allowed to fully implement this program in full. In these negotiations we will go small, to see if arbitration is key to our ten-year plan. We won, and now they are in fear of arbitration; we will go higher in the next negotiations. It seems that there was controversy in their elections, which leads us to believe that there are factions/riffs in leadership, which will work in our plans.
Bruce Hansen “The nice guy” His reputation proceeds him as someone who wants to be everyone’s friend. He does not have the same charisma of the “loudmouth.” Full implementation of the service improvement process shall not take full effect. The service improvement process is to create new standard operating procedures to elicit discipline and force a higher turnover rate. Here are some of our priorities: • Use the service improvement process, to elicit fear of the employee • Strip power from the employee • Be as petty as possible and overwhelm the employee, and the employee will blame their representatives instead of us • Push for arbitration to stress the finances of the union. Looking at their LM2s, they are financially weak So far, there has been no resistance from the nice guy on our push for more discipline. Contract time, and we are going to push for more at the table, because they fear arbitration and the membership is not strong enough to fight back. It seems that their internal power struggles will work in our favor. Their leadership is divided at the table, weakening their position. It seems that the loudmouth and his faction have walked away from the table, leaving the good guy to fend for himself. They have excepted our terms and put it to their members, we believe the nice guy will convince them to except it. We won, and implementation of re-organization, outsourcing, consolidation, and reduction of union members can commence. In the CBA we will create a fictitious joint labor and management committee, where we will pick sympathetic employees to fill these groups, the goal is to weaken any union influence on employees in the workplace. In addressing the hours of service, we have come up with a packaging program that in theory would strip employees of their seniority positions. If the nice guy excepts the MOA, then employees will not hold us accountable, instead hold their leadership responsible. After implementation of the packaging program, their members were angry, which helps put a wedge between the employees and their union leadership. With the victory at the table, it is time for the executive to reap a financial benefit from the financial windfall. 3% raises across the board. The union elections have experienced even more controversy than the last time. It seems that union members are more likely to fight themselves then us. This puts us in a higher position of power.
Shirley Block: “John Hunt -2.0” She has neither the charisma or the vocal skills of the loudmouth, she is all smoke and mirrors. She had a hand in fractioning their membership. Her age and her ability to lead the entire membership will work in our favor. The employee’s reliance on the union is at its weakest point. She has not displayed any resistance to our 10-year plans. Her public appearances have been laughable at best, and she like her predecessor are only playing to her base. If all goes according to plan, she will become our biggest ally. She has decided to not fight for her membership on the tool allowance that would have guaranteed a win for them. The service improvement process is proceeding nicely into its next phase, to create SOPs that will lead to more discipline and wins in arbitration. The employees will blame their leadership instead of us. The implementation will begin in the recertification courses. She had not shown any resistance to the increase of disciplinary action, like her predecessor. We have created a state of fear in our employees, and they will follow all directives. Employees will continue to display less and less reliance on its union leadership. We’ve also heard that she chastises her members at their monthly meetings. Contract time, and we won yet again, this time we have changed language in the contract to benefit our needs, and their leadership did not resist. She has become our ally in our needs, as she has divided their members into voting blocks. We have won. This union is broken.
Posted by Al M at 6:02 PM