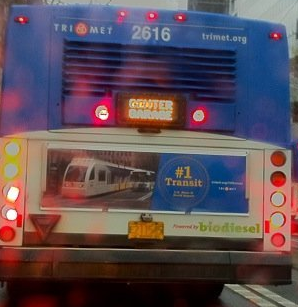 After dropping $8,000 on bus and train billboards declaring “#1 Transit” in bold yellow letters, TriMet is scrambling to remove the self-aggrandizing ads from public view.
Oregon’s largest transit agency started putting the placards on the side of 168 buses and trains after seeing a February U.S. News & World Report story naming Portland “the nation’s “best city for public transportation.”
The corrected version knocks Portland from first to fifth place in the rankings.
“This is unheard of,” said TriMet spokeswoman Mary Fetsch. “We’ve tried contacting the story’s author to find out what happened with the faulty data.”

“Who knows himself a braggart,
Let him fear this, for it will come to pass
that every braggart shall be found an ass.”