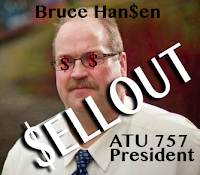 So we have a newly elected president for our union and what's the first thing she ends up dealing with?

A subversive movement by the ex president and his little band of supporters.

Wonderful, such solidarity at our union it makes one disgusted to even be a union member in such a dysfunctional union.

Some of us are finding it quite incredible how Bruce is mobilizing his troops to fight against his own union.

Not once did he mobilize his supporters to demonstrate or protest anything against the tyrants that run Trimet.

As a matter of fact he gave the Trimet executives EVERYTHING they asked for!
(hours of service, block signups, health care givebacks, Bruce really screwed us big time)

And so the truth about Bruce Hansen finally comes out, the only thing he cares about is himself.
Posted by Al M at 8:34 AM

Oh and a Big Thank you Bruce for the Company Kaiser Health plan all co-pays went up....YOU Bruce dug your own Grave

Yes more splits coming our way in dec sign up thanks to the block run program stopping.4-10's shouldnt even be in block run program it was a thing in the past they did in summertime but full time love it the part time hate their 4-7.5 hour shifts and they haven't even worked them.

Nobody is ever happy with Trimet signups.
The block signups removed operator choices, it should have been ended.