Neil Mcfarlane is no hero 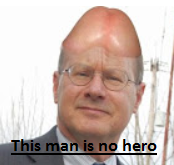 In less than two months time the vaunted MLR orange line will open.
After spending $1.5 Billion dollars the 7 mile line to Milwaukie will become reality.
This new MAX line will help some people and hurt others.
Bus 33 riders who had a one vehicle ride to downtown will now have to transfer.
Transfers is what makes public transit a horror show.

All this ongoing hoopla  about this new line will attempt to canonize Neil Mcfarlane.
Mr Neil Mcfarlane is the man that broke 40 years of past practice that lead to the breaking of our union.

Neil Mcfarlane had no problem breaking promises that were made to current Trimet retirees. We get cut he gets a bonus.


God Bless America and people like Mcfarlane who do the dirty work of hurting other people. Not one media outlet made mention of the 20-30% cut that was made to current Trimet retirees pensions.

His overpaid lackeys and  useless mainstream media pounded the theme that Trimet union employees were "not deserving" of decent health care benefits.
This in turn turned the public against the union employees which then created a hazardous working environment for every union employee interacting with the public.

Mcfarlane demanded that all union employees, the ones that actually do the 'work',should have the same medical benefits as office workers and over paid executives. (The people that work 9-5 in an temperature controlled environment.)

The past president of ATU757 thought by by capitulating to Mcfarlanes demands things would go better for current Trimet employees. I have not seen any evidence that working conditions have improved for Trimet union workers.

Neil Mcfarlane is the Scott Walker of Trimet.
He used his position to turn the public against his own employees.
He has facilitated the transfer of hundreds of millions of tax dollars to his cronies and insider contractors.

He is in every sense of the word, an agent of the oligarchy.
And for doing all this dirty work he gets to retire at the time of his choosing (I bet after orange line opens) and live out the rest of his days in luxury.

The man is no hero.
Don't let the mainstream media convince you otherwise