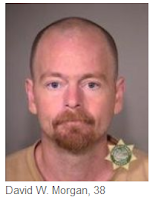 
A 38-year-old man has been indicted on criminal mischief and intimidation charges, accused of repeatedly calling a TriMet bus driver a racial epithet and spitting on him.


David Wade Morgan apparently didn't like it when driver Lorenzo Williams wouldn't let him on the bus April 23.

The driver said Morgan had tried to spit on him two weeks earlier, so he barred Morgan from boarding at East Burnside and 12th Avenue, according to Multnomah County Deputy District Attorney Todd Jackson.

Morgan began yelling, called the driver a racial epithet and spit on his face three times, according to a probable cause affidavit.

Williams closed his bus door and watched as Morgan grabbed the passenger side front windshield wiper and broke it, the affidavit said.

A Portland police officer responded and spoke to Morgan. Morgan said he didn't remember spitting on the driver. When asked if he wanted to apologize to the driver, Morgan said no and repeated the racial epithet, according to police and prosecutors.

"TriMet takes seriously any assault, harassment or menacing toward an operator or other employee,'' said Roberta Alstadt, TriMet spokeswoman. "Such actions are unacceptable and we ask our riders to show civility and treat our operators with respect and common courtesy.''

A bench warrant was issued June 26 for Morgan's arrest, and he was taken into custody on the indictment at 1:27 p.m. Wednesday. He faces charges of first-degree criminal mischief, interfering with public transportation, harassment and second-degree intimidation.

He has one prior conviction this year in Portland for interfering with police.

Morgan is being held at the Multnomah County Inverness Jail.