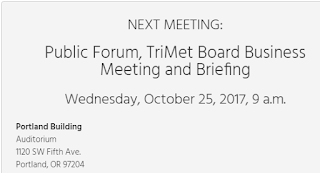 So lets see who's on the corporate Trimet welfare list this month.

This is the Trimet that very few people understand or even are aware exists.
Mainstream media just reprints Trimet press releases and does the periodic "bad bus driver" story but there is never any actual "investigative reporting" into Trimet activities.

1-Trimet will be submitting 10 grant applications,
-$11 million to pay "debt service"
(this is public transportation's dirty little secret. This is the -banksters  taking their cut of the cash)
-$5 million also to the banksters
-$25.89 million for bus and rail maintenance
-$38.76 million also allegedly for bus and rail maintenance
-$3.36 million to buy new buses
-Then there is a bunch of other stuff that you'll have to look up yourself
-And then right at the very end is $100 million dollars for the latest light rail line. So they are plowing $100 million into this pork barrel project which doesn't even have the funding approved. I imagine that $100m keeps the professional planners at Trimet busy for the foreseeable future. It just amazes me how citizens can't even get dedicated bus lanes but millions and millions is available for all sorts of pork projects.

2-$1,834,976 to MTM Services to conduct lift assessments.
Trimet executives say that this service can't be provided "in house" because it would be 'cost prohibitive'. Typical neoliberal bullshit

3-Convergent Pacific will get another $600k on top of the existing contract  to redesign the Ruby facility
(don't you love how this is so routine, anytime these contractors need more money Trimet executives happily hand it over, but if citizens request more bus service they get ignored)

4-Exemptions from competitive bidding
This is always something I have had dim view of. Basically it allows Trimet executives to hand out cash to whoever they want to. Nope.

5-Appointments to board committees
Head hack Warner continues as president, Stoval take over as VP, and "DR" Linda Simmons is treasurer and then the other committees.

6-Another $120 million bond for guess what?
Yup, you got it, capital projects.
You getting the picture yet who it is that profits the most from Trimet?
It aint the riders that's for sure.

7-Establishment of a committee to 'advise' Trimet executives in prioritizing HB 2017 projects.
It's not clear from the resolution who is actually going to be on this committee. It all sounds good on paper but everything sounds good on papers.
We'll keep a close eye on how this develops.

8-G4S gets another $5.2 million on top of its current $5.4 million
(there's the extra money just appearing out of nowhere for these contractors again).
G4S is very controversial and plays a major role in the international police state.
The FINANCIAL TIMES did a great story on these profiteers.
More evidence of Trimet's role in funding police state activities

9-About $4 million for landscaping services.
Not much to be said about this other than why is this also contracted out?
Neoliberalism is why.

10- Resolution allowing the General Manager more spending authority before bringing it to the board.
BAD BAD BAD!
This means less transparency but this is how they roll isn't it!

11-Last but not least is the General Manager Job Description. The throne of Trimet, described.