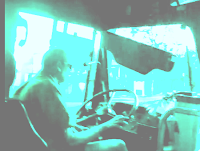 It's Virtually impossible to communicate to the world exactly what some TriMet drivers have to put up with during heavy downpours at night driving a TriMet antique.

These old buses, with windshield wipers that can drive you insane. They are so noisy and clunky that when you hit a red light you have to turn them off, or you have to keep adjusting the speed.

And the noise, the bus is rattling like a something you would see in a horror movie.

The rain is leaking through the body.

The mirrors and windows are so full of water that forms into tiny little balls, you make turns 'blind" because you can't see anything out there!

The windows are fogged because the defrosters are useless.


You can't even see where you are going never mind actually attempt to call the stops!
(watch out though, a TriMet spy may be on board)

The seat so uncomfortable, your back is hurting you.


It really is hell on wheels.

(Wait till they make us put chains on without any snow)
Posted by Al M at 12:58 AM

And we can't forget how your transfers get soaking wet from the water dripping from the windshield.

And also, the totally useless defrosters which allow the windshield and windows to fog up. No safety hazard there.

How DARE you bitch and whine about those buses, they are AWESOME! They are great - that's why more people in Portland use transit than other comparable cities in the country.

The conditions make me want to retire.

What's sad is that TriMet just does not listen to the folks that have to put up with this crappy fleet of vehicles. Folks like Steve and Al...smart folks who care about their jobs, who just want to get people where they are going safely. They have to yell, and scream - and yet TriMet's Board and GM basically ignores them - new buses, basic maintenance...things like defrosters, heat, window wipers, and headlights just aren't sexy compared to Streetcars and light rail.

How many people must die? Is it that not enough people are dying, that is the problem? That it isn't a safety problem because buses aren't crashing because of it? What about being proactive and fixing problems, before they are a real problem?

Of course the Board doesn't give a damn - none of them actually use the system, ride the system, see the conditions first hand. They should be forced to, at least one ride a week - and they don't pick the route or the vehicle.

God Dammit, we're gonna build out MAX, so get used to it!