KOIN/KGW report on the Trimet apology 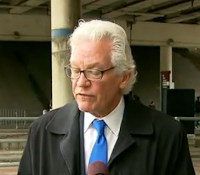 Starring Trimet's $200,000 man, aka white haired Bob Nelson. Yes its a screw up, yes its true that its actually no one persons fault, but then again nobody at Trimet lost anything as a result of this. I don't even think Trimet offered to pay for any personal items that were ruined from the riders on those trains that got flooded. So no, the apology is hollow and just the same type of thing we hear from them every time they screw up. And don't forget Trimet execs attempted to put this on the operators before we produced the audio clips.