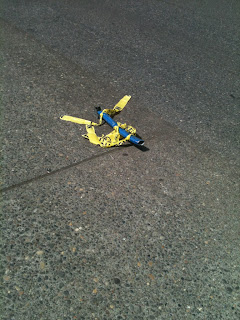 wonder how long it'll take trimet to fix that?

Took about two weeks to fix the sign that was knocked down at 99W and Walnut earlier this year.

However...I have to say, TriMet did better than Verizon/Frontier. Their pole which was also hit is STILL supported by two 4x4s bolted through the pole. PGE set themselves a new pole (took them about a month or two) and moved their wires over, but the old pole was lopped off just above the telco wires and remains for Frontier's purposes.