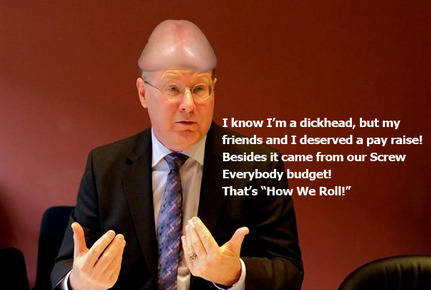 Mcfarlane will probably achieve "guru" status among the transit establishment now that he has 'broken' the transit union. I can't wait to find out what kind of raise or bonus awaits him.

But lets do a quick review of this mans tactics over the last five years.


The non funded obligations! How did they get there?
Rather than admitting that past boards and general managers were responsible for the mess he put it squarely on the backs of his union employees

Robbing the bus to pay the rail
Trimet had been cutting bus service for over ten years while at the same time increasing the rail service. Mcfarlane was never honest about this and only recently he has supported increasing bus service after realizing that Trimet was going to lose its base riders if they didn't.

Mcfarlane instituted Nazi like fare inspections onto Trimet after decades of lax policy. Trimet ticket machines have always been unreliable under Mcfarlane Trimet passed that responsibility to riders.

Trimet public records department is a joke with so many things 'exempt from public disclosure' and the cost for so many other things exorbitant.

Under Mcfarlane Bloggers are completely banned from getting any information about Trimet. One blogger was sent to jail for pestering a public information officer.

Mcfarlane illegally stole money from employees paychecks and had defied two court orders to return it.

Mcfarlane and his henchman Stedmen actually attempted to force employees to pay Trimet back for health insurance already received.

Under Mcfarlane all the old Trimet tickets became worthless after a certain date which probably netted Trimet thousands of dollars.

The GlobeSherpa transit app is a stealth fare increase and discriminates against low income, students, and disabled riders

Mcfarlane and his gang of thugs and sock puppets secretly gave themselves raises while they raised fares and cut services.

Mcfarlanes legal department was fined $5000 for withholding information from the court.

Mcfarlane stonewalled   OPAL like they were nothing but  toys for him to play with.

Mcfarlane was the most heartless general manager in the history of Trimet.

Come to the next board meeting which is happening on the 19th of this month and tell him so.

I will be there