TriMet was communicating good, but...

During the storm, TriMet had been doing a good job on Twitter, even promptly replying to me at 12:30 AM on a Sunday night, which I wasn't expecting (or really needed since it wasn't a time-sensitive matter).  They were also actively responding to people wanting to know where there bus was with specific information. 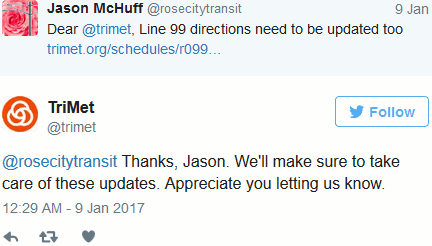 However, yesterday evening they seemed to disappear, even though conditions had not yet subsided and things were not back to normal.  Many bus lines had been cancelled or were detoured and two separate MAX bus bridges were going on, with service elsewhere problematic.  And when MAX another disruption occurred, this time a car stuck blocking the tracks, it took them over an hour to put out an alert.  In fact, by the time they did so, the vehicle was about removed and service restored.

I'm glad you brought this up. Trimet treats its twitter desk like its a hobby. When they feel like it they staff it and when they don't feel like it they don't. Unfortunately people are looking for real assistance when they need it and that's during operating hours. So sad that Trimet management holds such contempt for its riding public treating them as an aside like this.

We'll get to you 'if we have time'. What's more important than keeping the 'customers' (as they like to say) in the loop.