The good and the bad of TriMet alerts

When it comes to putting out service alerts, TriMet does some things good, some things not so good, and other things bad.  In addition, there are automated methods that could be implemented to make alert distribution uniformly good.

Bus reroute instructions that are sent to operators are made available to the public at the same time, meaning that riders can know in near-real time that something is happening:


approx 6:56 PM: #12 Lines 12, 93 to Tigard regular route to Pacific and Hall then left Hall, right Commercial and into Transit Center.

These alerts appear in multiple locations on the Web site--not just on the alerts page itself but on route pages, in trip plans and elsewhere.  They can also be accessed over the phone and through 3rd-party apps.

Moreover, often just 5-15 minutes later--even at off times like weekend evenings--these dispatcher written ones get replaced with ones that are rider-oriented and professional:

THE NOT SO GOOD

TriMet itself does not make these routine bus alerts available by e-mail, RSS or Twitter, all of which riders are encouraged to sign up for.  This is the case even though there are e-mail and RSS categories for every individual route, and riders may desire to get their information though these channels since they are "push" instead of "pull" and may already be regularly checking them.  In addition, Twitter and RSS also make good archives for those interested in what has happened in the past. 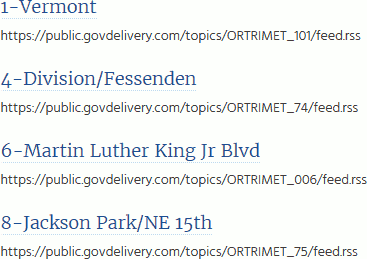 I have created a Twitter feed of TriMet's alerts myself at @unTriMetAlerts and TriMet deserves credit for making it easily and formally possible for other people to do things like this, but it is arguable that it is something important enough that it should be done officially.

While TriMet has a decent process for creating bus alerts, ones regarding MAX are all done manually. This means that it can often take up to 30 minutes for them to be put out since a communications person must be notified, confirmation made about the parameters of the situation and the alert posted to each separate channel.  By that time, many riders will have been affected or will be affected when they could possibly have chosen an alternative.

WHAT TriMet SHOULD DO

This goes to show that bus alerts are readily available if one goes to the right places, and that MAX riders do not get "VIP treatment" (besides alerts, it also takes time for them to get shuttle buses going when there's a disruption).
Posted by Jason McHuff at 3:02 PM