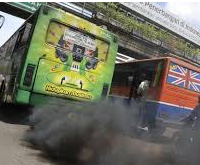 Despite its green credentials, TriMet has long operated one of the dirtiest big-city bus fleets on the West Coast, a review by the Portland Tribune shows.
Greater Portland's transit agency has continued running the most polluting type of diesel motors long after other agencies added filters to their buses to curb cancer-causing emissions. Portland's air is among the most diesel-polluted in the country, and the annual tally of diesel-related premature deaths statewide may run as high as 460.

Furthermore, for the past seven years TriMet has declined to apply for federal grants that could have covered the full cost of the clean-air retrofits, including labor, the agency concedes.

The failure to clean up all of TriMet's buses apparently stems from years of budget problems that several years ago led to a renegotiated union contract and an increase to its payroll tax.(and here we have the big lie that is repeated endlessly. Somehow its the union employees fault that Trimet didn't clean up its bus fleet. Trimet had no problem finding $30million for a fancy fare system that no one asked for. Trimet allocates 100's of millions to capital projects, including light rail to Tigard and a pork re-design of Powell Boulevard. Etc Etc)

"A lot of it is a matter of money, to be honest with you," said TriMet General Manager Neil McFarlane, when asked about electric buses. "We've prioritized growing the service."(A little bit of honesty, but just a little. The reason why Trimet prioritizes "growing" the system is that capital projects directs Trimet policy.)

"It feels that, for whatever reason, the negative impact that TriMet has on people's health due to emissions just hasn't been a priority for that agency," Peveto said.(and that includes its own front line employees who have been dying from cancer)

Asked why they halted their clean-air retrofit program in 2011, TriMet officials cited a lack of funding and maintenance staff. They said the agency didn't want to incur any additional maintenance costs created by unexpectedly frequent filter cleanings.(once again, poisoning people is of little concern to an agency that is run by a capital projects cabal)

Interestingly, TriMet's website has, for six years, presented an inaccurate rosy picture of its bus fleet's emissions, using graphics and text to indicate that its emissions had plunged precipitously, when the reductions and improvements were far less or more gradual than indicated.
One chart, labeled "TriMet's Emissions Reductions, showed the tail end of a bus bearing the label "emission levels," and numbers showing a huge plunge in emissions between 1988 and 2010.
In reality, the numbers actually refer to changing federal standards for new bus engine emissions TriMet officials confirmed Tuesday. (You mean they lie? Who woulda known?LOLOLOLOLOL!)