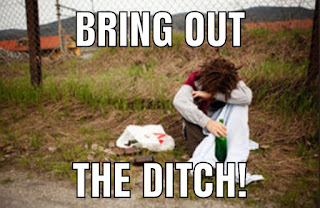 I close the door in their face.

I walk over sick bodies on the sidewalks.

I pick up mentally ill, medically fragile people in my vehicle and I leave them in unfamiliar pockets of the city.

I ignore the calls of help from a barely clothed man laying on the greenway, covered in his own waste.

I am ordered to not board people who are a possible biohazard, because it costs the company I work for $300 to trade buses on the road. I had an older man fall asleep on my bus early one morning and woke to find that he had wet himself. He apologized and left, embarrassed. What bus is going to get him back home for a fresh change of clothes? Is there someone he can call? Or will he just have to wait for his pants to dry enough that no one will notice?

We used to have state run hospitals and facilities that cared for people with mental illness and other various physical and cognitive disabilities. Those places also practiced eugenics and over medicated and abused their patients. There was a time when a husband could have his wife committed if she wouldn’t have sex with him, or didn’t keep up on the housework, or, you know, maybe he just wanted to spend more time with his mistress. Teens were committed for being “promiscuous” or not wanting to attend church with their family.

Instead of creating safer, better facilities for these folks (the ones who actually needed help), we shut them down. Instead of changing the laws and requiring ACTUAL reasons to get help for a loved one, now we cannot do a thing. And no one is willing to help.

So here I am. Driving a bus for someone who doesn’t know where to go, and booting them off when we get to the end of the line. Yet another unknown starting point of their day.

That barely clothed man covered in feces? He was laying in the greenway of one of the many hospitals in the city. His hospital scrubs were stained brown and a wheelchair lay on its side just 3 feet from him. After he was wheeled out from the hospital to fend for himself, he watched as buses drove by every 7 minutes and hospital staff walked to and from work. Deep from his gut came emotions that I have never experienced in my life, as the one place that could help him had just publicly rejected him.

So yes. I treat homeless people like shit. Society has written them off as non-humans, blocking our view of the scenery that we are entitled to. They shit on our sidewalks just outside our $3K a month lofts and it pisses us off. They disturb our happy hour of microbrews and tapas on the sidewalk patio. They don’t have to do anything specific, just being present ruins our appetites. The piles of trash along the freeways and sidewalks streets—theyput it there because they have no sense of respect.

Yo Yo Ma once said in an interview (I’m paraphrasing) that the worst thing that could happen to a human is the loss of one’s dignity.

We are all contributing to the overwhelming loss of dignity, and we need to open our eyes and recognize that something needs to change in America, and it needs to change fast! We need to demand this from ourselves, our neighbors, and all the way up to local, state and federal government.

We have seen exponential growth of homelessness and addiction, so many of that population should have been cared for since the beginning. But after all of the facilities have closed, we now see those faces on the streets and sleeping in bushes. Scores of others are joining those same ranks.

Without proper mental health resources, even folks who have a loving family who is doing their best to help, are left unchecked and lost to the streets.

Every now and then I think I get a glimpse of my brother when I drive my bus through town. I want it to be him, because I haven’t seen him in years and I hope he’s okay. But I know I won’t say hi. This handsome, brilliant man who spent time in Africa helping HIV/AIDS patients and had plans for medical school, is now a scary, angry man who refuses help from anyone. There was once a time that he was arrested and got a 72 hour hold in the hospital. We all visited and his medication and brief moment of stability allowed him and I to have a conversation about our favorite authors and the different kinds of trees all over the world that we dreamed of seeing in person.