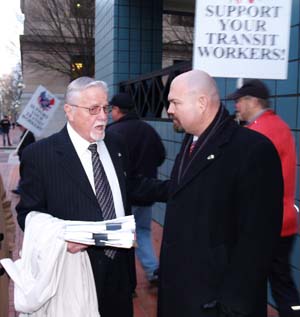 Hunt’s Board testimony was a rare face-to-face with general manager McFarlane. Local 757 picketed McFarlane’s West Hills home Nov. 19. Hunt says the general manager has refused to meet with him, instead referring him to Randy Stedman, who was hired Nov. 14 as TriMet Executive Director of Labor Relations and Human Resources.
Stedman’s background is as a labor relations consultant. He takes credit on his web site for defeating a union campaign. In 2011 he represented Mt. Hood Community College, where he won concessions from faculty after a near-strike.

Macfarlane just hires six figure executives when he himself doesn't want to deal with a problem.

But we not going to strike, which I agree; were going to bleed the district to death or cut the empire off at it's knees.