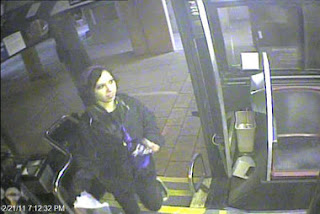 Reposted here, in the event that Commuter Joe censors me over there:

Wait a second, Commuter Joe. From your original story, you quoted Mary Fetsch as saying:

It is an older bus type, and there are not cameras on board that would provide detail about the incident.

But, there is a picture? How was this picture taken, if there weren't cameras on the bus?

And you still failed to question TriMet as to why, being that the bus was at the Sunset Transit Center, weren't there cameras around the Transit Center (I know they exist on/around the MAX platform) that would have captured the incident?

But...wait...thanks to Google Earth - there is a camera mounted on top of the elevator shaft, which happens to be...drumroll...25 feet away from the 62 bus stop! And another fixed angle camera is located on the ground level of the garage, just steps away from the 62 bus!

(Note, Oregonlive.com stripped the links to the Google Earth images.)

Something is fishy here, when TriMet is saying cameras don't exist when they do, and no one is asking the hard questions of TriMet. There are questions, and we turn to the media for the answers...all I hear are crickets and not answers. As a bus rider, I'd like to know that someone is pressuring TriMet to ensuring that I have a safe ride instead of the media that is a TriMet lap dog.

As I understand, when the TriMet supervisor arrived at the scene, a group of kids were still hanging around the transit center near the 89 bus stop. A passenger ID them as the culprits. There was no effort to approach them and the police was not involved.

Let's face it. TriMet has no intention of prosecuting this case.

There was no effort to approach them and the police was not involved.

Let me get this straight:

Someone bails on a $2.35 fare, and they get fined, hit with an exclusion order, etc.

Someone vandalizes TriMet property, forces a bus out of service, forces a bus to be pulled from somewhere else (thus involving a second driver), inconveniences anyone who is waiting for or is already on the bus, and requires mechanics to immediate resolve the matter - costing TriMet hundreds of dollars in labor and cleanup costs, plus the inconvenience of RIDERS, the VERY REASON TRIMET EXISTS AT ALL - and it's ignored?

Please...anyone...explain the logic to me.

Vandals should be arrested on the spot.

Fare evaders should be forced to pay a fare on the spot (with no transfer as the penalty, the fare will permit them to complete their journey on the same vehicle), and if they can't do that, a $10 penalty fare within 20 days (for first time offenders)...and only really go after the repeat offenders with the huge fines.