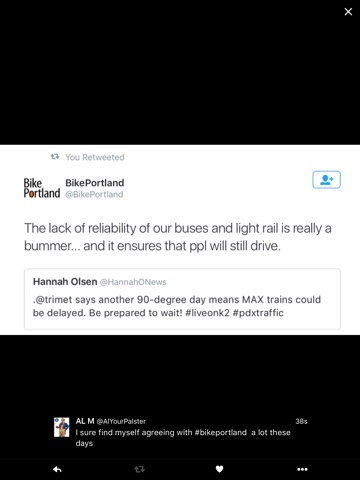 Oh, I didn't realize Bike Portland still existed. I sent Jonathan an email, but he either ignored it or doesn't check it very often. Either that or our last sparring session left him truly pissed off at me, but he didn't seem to be as touchy as his followers. Thought we had begun a meaningful relationship last year, but oh well.

As for a "lack of reliability of our buses", this is such nonsense as to be totally ridiculous. NO transit system is perfect, and when the weather turns extreme you can expect delays for many reasons. Buses overheat and break down, trains have to run slow because of temperature extremes affecting the power supply, etc.

People: If you want to get somewhere on time, plan A-H-E-A-D. Always take a bus or train before the one that would get you there on time. That way, if a bus is delayed chances are very good the next one will get you to your destination on time. If you wait until the last possible minute, don't blame TM if something happens which delays you. Our job is to safely arrive at a destination, not plan your trips for you or to take the blame if you're late. There seems to be a lot of failure to accept responsibility for one's own actions these days, coupled with a hefty portion of laying the blame on others.

But then again you're correct, it American public transportation

And that is within ONE MINUTE of published schedules

That other 1% represents 2 mins late

Japan also has capable management that evidently "gets it". They probably have extra service available at a moment's notice too. You gotta admit, Japanese people are usually very efficient. We try to be on time, sure we do, but traffic is the biggest culprit. Plus, our schedule writers seem to use drones to time routes.