Latest information from the Institute 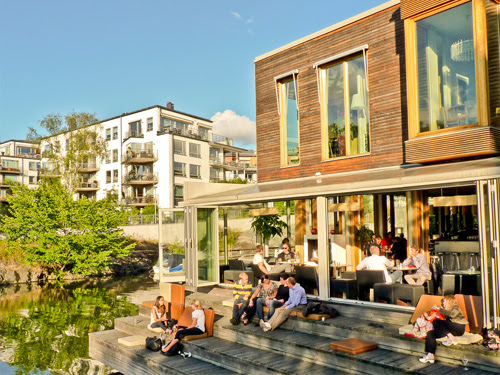 Image: Hammarby Sjöstad development in Stockholm Sweden
Happy World Carfree Day!
Cities around the world celebrated World Carfree Day on September 22nd. ITDP celebrated by publishing a report on new European developments that have cut car dependency and boosted rates of walking, cycling and transit ridership. We've also got a round-up of Park(ing) Day activities from ITDP field offices around the globe.
Europe's Vibrant New Low Car(bon) Communities
ITDP has issued a new report that examines eight new developments across Europe and finds that the design and policy measures these developments have employed to limit car use are working. These developments have lower rates of car ownership and car mode share, and higher rates of bicycling, walking and transit use than comparable areas or their surrounding cities. This also means these developments have lower carbon footprints from transportation.
Greenwich Millennium Village in London has a car mode share of 18%, less than half of that in the surrounding district, which has a car mode share of 44%.
Vauban, in Freiburg, Germany has a car mode share of 16% compared with the citywide average of 30%.
Car ownership rates in Houten are only 80% of that of the surrounding city of Zeist in The Netherlands.
Also in The Netherlands, bicycling mode share in GWL Terrein in Amsterdam is 50% compared with the rest of Amsterdam West, which has a cycling mode share of 32%.
These developments have employed a combination of carrot and stick measures that promote walking, cycling and transit use, while regulating road use and parking to make car use less convenient. These measures closely align with ITDP's Eight Principles for Transport in Urban Life.

It is also worth noting that nearly all of these developments were created in close proximity to existing urban centers and near good transit connections. This combined with strong design measures to make cycling and walking safe and pleasant take away a lot of the "need" for car ownership, and make commuting by car even less essential.
The report was researched by Nicole Foletta and Simon Field.
Download the report (best for desktop printing and on-screen).
Download the report (best for high-quality printing).
Park(ing) Day 2011 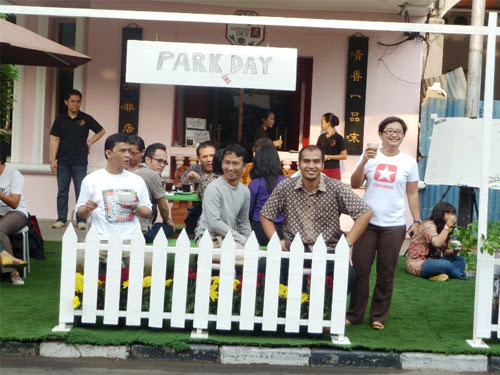 Image: Park(ing) Day 2011 in Jakarta, Indonesia
This year for the first time all of ITDP's field offices participated in Park(ing) Day. Originally invented in 2005 by Rebar, a San Francisco-based art and design studio, Park(ing) Day has grown into a worldwide grassroots movement which in 2010 included over 800 "PARK" installations in more than 180 cities in 30 countries on six continents. This year ITDP contributed to events in over a dozen locations in eight countries on four continents.
A slideshow of photos from the events is available on ITDP's Flickr page.
Argentina
In Buenos Aires our offices set up several mini-parks, and filled them with picnic benches and games to attract passersby. They were visited by Guillermo Deitrich, the Undersecretary of Transport for Buenos Aires. Their events were covered by two main television news channels as well as several major radio stations.
Brazil
In Rio, ITDP partnered with Transporte Activo as well as Columbia's StudioX at two different locations. With StudioX, ITDP created a nighttime Park(ing) event that included a panel discussion on parking policies followed by a dance party that lasted until the wee hours.
See video from Park(ing) Day in Rio (in Portuguese)
China
In Guangzhou our offices provided technical assistance to a local NGO, who organized the Park(ing) Day events. Students took over several parking spaces and installed a picnic area, painting table and offered passersby the opportunity to be photographed as part of Park(ing) Day.
Hungary
In Budapest ITDP Europe held a Park(ing) Day event on September 19th as part of European Mobility Week. They partnered with the National Development Ministry,the Hungarian Parking Association, the Metropolitan Nursery and the Clean Air Action Group to take over three parking spaces downtown and transform them for the day.
India
ITDP hosted the first Park(ing) Day ever in Ahmedabad this year in cooperation with the Center for Environmental Education, CEPT University and Bakeri Urban Development. The event was a big hit with press and the public alike. The Commissioner of the Ahmedabad Municipal Corporation visited the event and commended the activity and said he wanted to find more opportunities to transform parking spaces into public spaces more often. In Chennai ITDP is working with a local NGO, Chennai City Connect and the traffic police to educate the public and raise awareness about the need for better parking management and enforcement.
Just one of the several stories about Park(ing) Day in Ahmedabad
Read more about the efforts in Chennai
Indonesia
In Jakarta ITDP worked with a local coffee shop to hold a Park(ing) Day event in front of their shop. Local businesses have been concerned about illegal on-sidewalk parking that is creating a congested environment for drivers and walkers alike in a popular business district. The government also joined the event and was part of a midday press conference at the site. Udar Pristono, head of the Jakarta Transportation Agency, said "By returning pedestrian areas to public spaces and clearing them of parked vehicles, we will help create a good climate, good economic growth and blue skies." Other activities included live musical performances, and of course, lots of coffee drinking!
One of the many articles about Park(ing) Day in Jakarta
Mexico
Mexico is partnering with BiciRed the national network of cycling groups to hold a Park(ing) event for World Car Free Day.
Our Cities Ourselves Opens In India 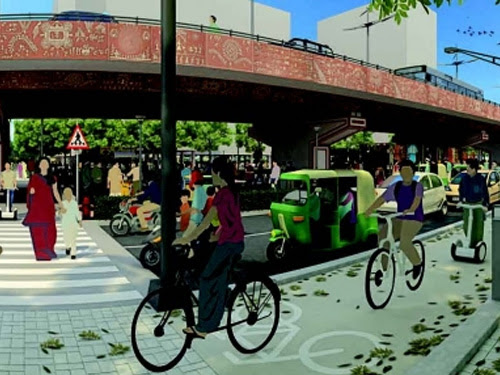 The Our Cities Ourselves exhibition opened last week in Ahmedabad. Already it has generated lots of interest from the media and government officials. from September 20, 2011- October 16, 2011. In addition to the show's international content, ITDP worked with local architects to develop six new in-depth visions with renderings that imagine the future of Ahmedabad. The show will be on display at the Kanoria Centre for Arts through October 16, 2011.
Learn more about the exhibition at www.ourcitiesourselves/india and on ITDP India's Facebook page.
Posted by Al M at 2:04 PM