Trimet insider gives me perspective on the latest Trimet Fail 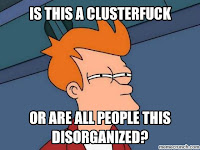 I interviewed a supervisory Trimet employee who  provided me some insight into this latest Trimet disaster. A disaster which inconvenienced hundreds if not thousands of commuters last night. A disaster that was totally preventable. My questions are in red


So tell me, from your perspective, what happened last night?

As a transportation operations employee, I can't tell you how extremely pissed off I was at the conclusion of the basketball game that there was virtually no information for passengers, just platforms crowded beyond capacity due to the lack of trains

The supervisors on the ground and the few customer service personnel that remained (e and j were nowhere to be found) were doing the best they could but it was just bad on all levels.

And the biggest thing that it indicts is the ability/knowledge of the management of how the system actually operates.


Took me 3 hours to get home  when its usually 45 minutes!

But, it starts with employee development, something that TriMet flatly refuses to comprehend is important

wow, what do u mean by 'employee development'?

I haven't seen/heard any of the scuttlebutt about what actually caused the cataclysmic failure last night, but I suspect it was something like this:


1. Train gets stuck due to mechanical failure somewhere near gateway.

2. Controller  stops train movement to troubleshoot/get broken train out of the way/whatever, without realizing that there is a sleet storm at Gateway

3. Overhead freezes over because there is no regular movement of trains

Controllers get very little training, and NONE that is job specific

TriMet can have all the policies and procedures in the world, but without effective training and professional development they'll never get implemented/followed.

And with management that doesn't know what it doesn't know, we're doubly screwed, because the manager will suggest something; a relatively uneducated controller will attempt to follow/implement said suggestion and then the whole thing blows up into a giant cluster.

Most disturbing is that for the last 8 years or so, at the end of every November, we're all issued a copy of the Winter Operations Plan. That hasn't happened yet this year. Questions about it are met with "your managers will tell you what you need to know". And then, of course, the complete lack of attention that caused the issues llast night.

fascinating-so if you could place the blame squarely on one person who would that be?

shouldn't those two know better? How many years have they been executive managers at Trimet?

Shelly's been manager-level or above since I've been wearing a white shirt -
Jay's been in management since 2005 or so, and was promoted (silently) to director last year.
that being said, none of them have ever been "managers"
just "executives"

People are led, things are managed. Unfortunately the executive class in Transportation Operations doesn't understand that.

Maybe (although I don't hold much hope for it) the new "COO" they just hired from vancouver will be able to get a handle on it before he becomes mired in it.


and they never have to pay for their incompetence

no; i'm sure they'll both get promotions

TriMet really needs to go back to the way things were 20 years ago or so...

Rail DIVISION and bus DIVISION. Trying to manage two disparate modes as though they are one is probably the ultimate reason things get fucked up so badly.
No other transit agency that I am familiar with does things that way.

I happened to get off work just as the Blazers game was ending (the Line 4 bus presumably from Gresham I took was on time even if the trains couldn't run there) and made a comment to a white shirt at Rose Quarter about how it wasn't a good time for a failure. His response was, in a disgusted tone, "Every day!" I think as in every day something happens.