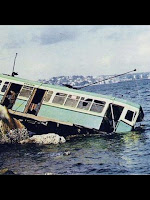 Doesn't matter that some of the points are accurate and that it is indeed true that light rail TOTALLY changes the communities it touches. Doesn't matter that there is supposed to be freedom of speech in this country. Nope, this person was subjected to the usual Internet baloney and removed the article. Which she should NOT have done. I've been watching the light rail propaganda in LA and it's really something I got to tell Ya. They have a massive tax hike on the table and don't want anybody messing with people's minds with alternative narratives. This whole world wide light rail movement is scary.
I wonder about all those pro rail tweets in LA. They all sound contrived to me


The arrival of the metro marks the first time that passenger trains have traveled the 15 miles between Downtown Los Angeles and the Pacific Ocean in nearly 65 years -- and I think we can all agree, a lot has changed in LA since the early 1950s, including an influx of crime in areas that seemed at one time to be totally safe. There's no question that this new train is going to be bringing new people to Santa Monica -- and that raises the possibility of crime, accidents, and the pitfalls of mass amounts of tourists with access to a part of the city that was at least geographically difficult to access before.
And once I started really looking into it, I started rethinking my “yay” vote.
First-off, a week before the line even opened, there was an underreported “train vs. car collision,” on the new stretch of track. Residents’ public safety is a major concern even without the new perils the train’s bringing in; this is just one in a potential sea of traffic disasters that could come from bringing the train through a new, highly populated area of people not used to Metro-style transportation. And if you thought that one accident was an outlier, well, think again: literally the first workday the new stops were open for business, a drunk driver crashed through the gate and onto the tracks. Luckily no one was hurt, but come on -- it's only a matter of time.
And that's not even mentioning overcrowding -- which could lead to an increase in crime. And before you cry "privilege," it's not just me that's worried about this. Santa Monica's city manager Rick Cole says he's expecting 4,000-8,000 new people per day to flood in via train; this first weekend, we saw a massive influx of people via the new train cars. If that didn't worry the city, then why has the Santa Monica Police Department added nearly a dozen officers, and why is it looking to add another dozen?
The department has reconfigured its beats, or areas of patrol, based, in part, on the increased traffic expected from the new train -- and according to Saul Rodriguez, a lieutenant for the Santa Monica Police Department media relations team -- the two crimes police are most expecting to increase are bike and car burglaries, followed by a rise in traditional traffic accidents as well as train to car accidents.
I don’t know about you, but if they'd told me that in the first place, I'm not so sure I would have signed up.
Not only that, but there's proof that the trains have assisted in crimes in other parts of the city. I talked to Detective Sergeant Robert Bartl of the South Pasadena Police Department, and he told me, although he lacks any “hard stats that would show the train has brought in more crime,” his department has apprehended several alleged criminals, who, when questioned, admitted the Gold Line -- which opened in 2003 between DTLA and Pasadena -- played a part in their crimes.
The Expo Line terminates at 4th St and Colorado. That’s directly across the street from the Santa Monica Place, the heart of Downtown Santa Monica. With a route loosely mirroring that of the 10 Freeway, Expo Line officials say the full line will handle an average of 64,000 boardings by 2030. At present, the beginning piece of the line from Culver City to Downtown Los Angeles clocks about 30,000 boardings per day.
That's a lot of people from a lot of places who didn't previously have easy access to Santa Monica. And that makes the “what if” possibilities that much more frightening.
Of course, there’s another side of the equation, too.
“The public perception is, you open a new transit station, you bring along more crime,” says Anastasia Loukaitou-Sideris, a professor of urban planning at UCLA as well as the Associate Dean of the School of Public Affairs, Urban Planning. But according to Loukaitou-Sideris’ decades of research, “crime doesn’t travel. You’re not going to see any stolen big screen TVs on the train.”
Touche. But if crime doesn’t travel, how about those Gold Line criminals? They could be handy outliers but personally, I’m voting that's not the case. I get it, Los Angeles wants easier access to the beach. I certainly don't need to sit in anymore traffic either. But what’s the cost?
The train seemed like a good idea at the start -- but now that it's finally here, I’m just not that sure anymore.
Sign up here for our daily LA email and be the first to get all the food/drink/fun Los Angeles has to offer.
Posted by Al M at 8:08 AM

This entire article was removed due to the hysteria it caused.