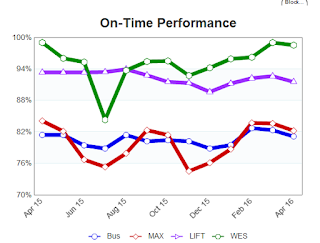 You know your light rail system is a FAIL when its on time performance is as bad as the buses.
Light rail is supposed to avoid the pitfalls of bus service.

But here we have Trimet light rail service continuing to be pitiful, month after month
And the management doesn't seem to be interested in fixing it.

One simple step that the management could take would be to END HOLDING TRAINS FOR FARE INSPECTORS!

I've been in many places and have never seen public transportation stopped so people could check fares.

Only in Portland Trimet is this routine.
And it causes numerous delays which trickle down the line.