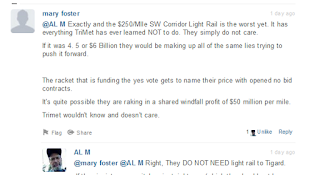 This is my response to a commentator at the Oregonian. I sincerely believe that Trimet capital projects should be dismantled at this time. It would be the fiscally prudent thing to do right now.

Trimet's  'on the ground' service needs serious improvements and there is no talk about changing that situation.

@mary foster @AL M Right, They DO NOT NEED light rail to Tigard.

If they insist on a capital project right now (which the should not be allowed to do) build another lane on 99W and run it for buses only during rush hours and everyone else in off hours.


Speed up the traffic AND offer a decent alternative. These light rail projects are not helping anyone but the special interests who profit off them and currently control the wheels of government.


It's my belief that Trimet capital projects should be dismantled at this time and all revenue put into existing service, including TRUE frequent service, which means 8 minutes between buses not 15, offered ALL DAY WEEKDAYS

Trimet light rail should be covered by 24 hour buses.


Trimet should have a discount bus pass available for students regardless of age, and a low income pass.


Trimet could have a world class system if the wheels of power were removed from capital projects executives which include Neil Mcfarlane
Posted by Al M at 5:36 PM