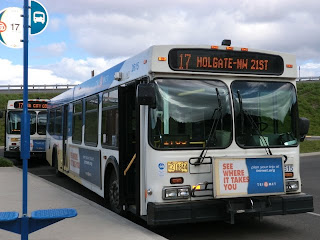 Steve, do you know if Shaler Halimon drives the 17? Seemed like I had him (or a guy that sortof looks like him) when I rode the 17 yesterday around lunch time.

Shaler does vacation relief or extra board I think.

The last time I drove down to Sauvie the layover was a gravel parking lot, looks like they have improved it a bit.

Max,It was Shaler that you saw yesterday.Was his signature 7 iron laying across the dash board?

How many riders actually board the 17 north of Linnton? Given that Sauvie Island is officially outside the TriMet service district (and thus do not pay TriMet taxes) I wonder why the bus goes there when it can turn around in Linnton.

Yeah well if that was him, then I totally pissed him off...haha....doh. Long story, don't want to get into it; but maybe I'll tell Al next time I see him. Didn't see a 7-iron, but I wasn't really looking either.

Erik:
When we left St. John's around noon heading towards Sauvie Island there was nobody on the bus except my son and I. There was one guy who got on in Linnton going back, though.

Coupled with having a bike rack to use, the service to Sauvie Island is very useful. Especially since Hwy 30 isn't nice to walk or bike along.