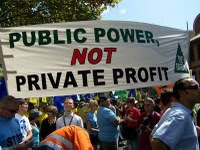 This last winter pretty much destroyed the MBTA and the agency has not been able to recover. The MBTA is the oldest mass transit agency in the USA and has suffered the same fate as many other transit districts have. An obsession with building new lines and leaving the old system to rot. The chickens have come home to roost in Boston now and as executives do all over the country they point the blame at the union workforce rather than the incompetent self serving executive class.

Transit workers are a very easy target because the vast majority of the public doesn't use mass transit and couldn't care less if it disappeared all together. It's not a respected job to be a union transit worker in this country and the transit executive class continues degrading the position as time goes on.

Boston is under serious 'privatization' threat right now. And when you hear those words it means only one thing. Lower wages and benefits for the people that do the work. That is the only thing privatization accomplishes. Degrading the workforce .

Americans love tearing down their fellow Americans. Especially if they are doing better than they are.