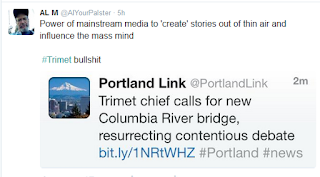 So he makes a 'speech' at the city club and the Trimet media stooges attempt to create more phony news out of this by making the claim that he is 'resurrecting the debate'.

Its unbelievable how they manufacture news in the Portland area. We all know how addicted Trimet is too capital projects and this is just one more attempt to try to find more money to keep the whole mafia going.

First they have all this orange line hype, then they raise the payroll taxes, and now they are trying to drum up even more money to keep that monster alive.

Why would anybody in Portland care about a bridge to Vancouver? Portlander's don't commute to Washington, its the Vancouverites that commute to Portland. They're the ones that should be bringing this up, not Mcfarlane.

Mcfarlane only has one reason to keep pushing this!
MONEY!

Read the Trimet stooge Tribune HERE (make sure to read the comments)
Good post at MAX RED LINE on this topic
Posted by Al M at 1:56 PM