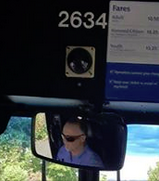 Today I was on the 75 bus at Hollywood TC around 12:30, when the driver got off the bus to use the bathroom. While he was gone, a woman got off to have a cigarette. When the driver got back, she tried to follow him back on the bus, but he slammed the door in her face. At this point, an 11-year-old child stood up and asked him to let her in, explaining that she was his mother. The driver completely ignored him and started driving. The kid started pleading and crying, and other people shouted at the driver to stop, but he kept driving until we got to the next stop, several blocks away.


He then demanded that the kid get off the bus. The kid told him his stuff was still back at the seat. The driver kept shouting that his mother shouldn't have gotten off the bus if he didn't want him to leave her behind. Eventually she showed up, having run the whole distance with a baby and stroller, and he shouted at her. She pointed out that he was the one who stopped to use the bathroom, and he snapped, "You wait for me, I don't wait for you!" It would have taken him literally a matter of seconds to let her on back at the bus stop. He chose to waste several minutes and terrify a child instead, in order to prove his asshole point. By the way, the child was black and the mother was white - though I'm sure that has nothing to do with it, right?
I filed a report with TriMet, but also think this kind of incident needs to be publicized. This was in no way isolated - racism, ableism, transphobia and homophobia are common practice among many TriMet drivers (mostly the old white male ones). I took a picture of the bus ID # and the driver sort of. I realize he's basically just a grizzled grey and white blur in this photo, but it's actually pretty true to life.
Posted by Al M at 10:44 AM