For about two decades now, TriMet has had a bus dispatch system which continuously tracks vital information about each and every bus, including where it is, how early/late it is, who is operating it and any issues the operator has noted.  However, the field supervisors and mechanics who are responsible for overseeing buses do not have mobile data terminals (MDTs) and can not directly access it.

This means that supervisors must verbally request all information from a dispatcher and only get bits at a time, and can not casually browse the data or spot issues on their own.  Their only way to receive information digitally is by page, which dispatch must manually create and send.  In addition, when dispatch is already busy handing an issue, they may not be able to get the information at all.  Supervisors must also carry paper copies of schedule data and other information and keep them up to date.

Not having mobile computers also means that any reports must either be hand written and possibly later transcribed, or must wait until the supervisor is at a location with a computer.  They can not be electronically done right after an incident or during slow time.

Also, up until the recent introduction of digital radios, I'm pretty sure dispatch had no way to tell where supervisors or mechanics actually were besides asking them or manually tracking where they were going.

(It should be noted that supervisors often are or should be driving or away from their vehicle assisting operators and passengers, and could not always use an MDT, especially a vehicle-based one.)

I recently came across the 2002 Portland State University paper Tri-Met’s Experience With Automatic Passenger Counter and Automatic Vehicle Location Systems, which says they were planning on getting MDTs then:


It was expected that the new BDS would not only yield more effective dispatching, but also result in an extension of the responsibility of dispatchers into the area of operations control (Tri-Met. 1991. Operations Control Plan for the Tri-County Metropolitan Transportation District of Oregon. Portland, OR: Tri-Met). The monitors displaying real time vehicle location, schedule and route deviation reports, and prioritized digital messages from operators has added a substantial amount of information to the dispatching environment. Dispatchers state that their workload has grown to deal with the increase in information and, consequently, operations control responsibility takes a low priority. Operations control remains the responsibility of field supervisors, but these individuals still lack access to the real time information available to dispatchers. To overcome this shortcoming, Tri-Met is planning to acquire mobile data terminals for field supervisors’ vehicles. There is also an interest in elevating the importance of operations control among the various responsibilities vested in field supervision.

Moreover, RTD in the Denver area gave supervisors MDTs when they installed their first dispatch system in the 1990s.  From Assessment of the Denver RTD's AVL System - ITS Report:


Using [the MDT], a supervisor can query a vehicle's location and schedule adherence information by accessing the central processor at the dispatch center. The MDT can receive and transmit data to the dispatch center. It displays information sent by dispatch, such as incidents or issues to be addressed, text descriptions of vehicle locations, and text messages.
The MDT is used for many tasks that the street supervisors previously had to do manually, including, but not limited to, accident reports, traffic reports, and operator violation reports. The paper report forms are automated and the street supervisor can enter information directly into the computer. These can later be downloaded into the AVL system databases.

And from Denver RTD’s Computer Aided Dispatch/Automatic Vehicle Location System: the Human Factors Consequences (red outlined items are ones that TriMet supervisors could do with MDTs): 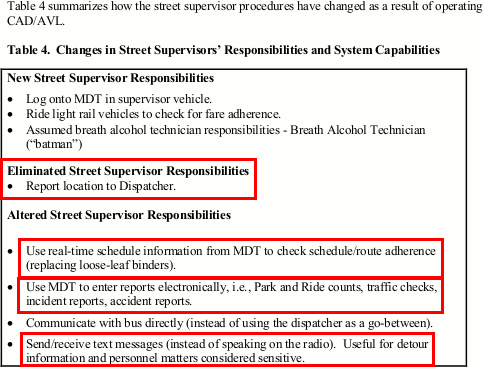 That document also shows that their first MDTs weren't even Windows-based: 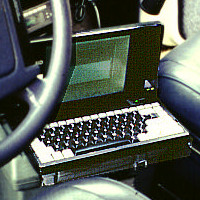 Also see Denver police, RTD bring fare enforcement into digital age - The Denver Post from 2011; not only can they electronically check riders' records from the field (instead of having to ask a second person to do it over the radio), they can have the data automatically entered and give the violator a typed receipt instead of a hand-written one. But it should be noted that MDTs would probably not be suitable, being possibly confined to a vehicle and not being handheld size. In addition, 100% use of them would be costly since many supervisors and police officers may inspect fares for only a small potion of their shift.
Posted by Jason McHuff at 11:22 PM

Good post I pondering this topic the other day while listening to dispatch where supervisors need to ask dispatchers where buses are.

And if they're driving or out of their vehicle, they may still need to do that. But today, a small tablet may be portable enough to be carried yet have a large enough screen to be useful. They would also need to create a dispatch system interface for it.