In case you may have forgotten, in 2012 OPAL went to the Trimet board of directors and publicly raised concerns about Mcfarlane and his staff raising fares, cutting service, and cutting employee benefits.
That was the year that Trimet technocrats (unelected and unaccountable) doubled the size of their 'contingency' budget. OPAL found something strange about this.  The board of course, being nothing but sock puppets, politely listened and then did what they always do.  Gave Mcfarlane what he wanted.
About 8 months later it came to light that Mcfarlane and his overpaid staff of lackeys had hidden raises  for themselves while making the rest of the people involved with Trimet suffer substantial losses
It was a watershed event to me because what became clear after that scandal broke was that tri-Met will never be held accountable for anything they do.
It became clear that the Portland transit agency is run by a "gang" with very questionable ethics. And that other "leaders" in the area actually defended this gross deriliction of duty. I'm referring to the now governor of the state of Oregon who at the time was the Secretary of State.
And then there is our useless mainstream media, which did cover the pay raise scandal to their credit, but they never did any followup and they never actually mentioned that Opal had raised serious concerns months previous to the revelations. The whole thing was dropped and the public, being the public, just forgot about it.
So I am looking forward to the single best analysis of Trimet budget shenigans by the only people qualified to perform this work 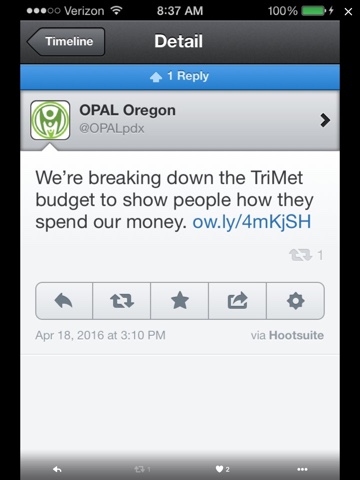 But we will have it for the next arbitration