SO WHAT LEADS ME TO BELIEVE THAT THE 'IMPOSED CONTRACT' MAY BE ILLEGAL?

This-first we will look at the section of the Arbitrator's decision that applies: 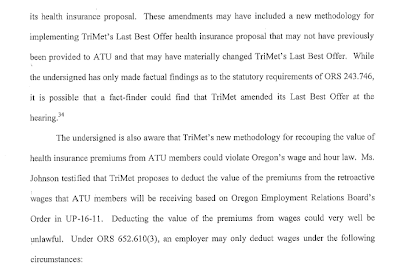 WADR, (with all due respect) Al, I've been reading and rereading these legal decisions as long as you have and I'm not able to draw the came conclusions as you.

For the "Imposed" contract to be illegal the District would have to act on it's 'hearing' rhetoric, which I predict it won't. If the arb's suposition that the District's rhetorically new methodology would constitute an unlawful amendment at the hearing, thus rendering their contract unlawful, the management won't do it. Then, the contract stays as it is, active, and the new meme from which we have to negociate next time.

I predict the District will not attempt to carry out their rhetorical change in methodology; they will abide by the ULP rulings and pay back what they took in both COLA and H&W benefits to the date of the Arbitration ruling; after which point they may...may lawfully impose the new terms of the contract.

I'm no lawyer and I'm just making guesses of course but something stinks about the whole thing.

And the smell is BAD!