A Caveman's Guide to Riding the Bus - Lesson 1: BIG vs. SMALL 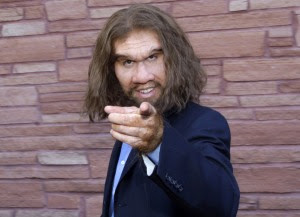 B. Bus Driver There to Drive Bus
Bus driver not make schedules. Bus driver not responsible for cuts due to economic downturn. Bus driver not one who assigned 40 foot bus to run needing 60 foot bus. Schedules, cuts and other things above bus driver's pay grade.
Bureaucracy BIG. Bus driver SMALL.

E. Damage to Bus Not Likely
Science important. Science determine what happen when objects collide. Some things collide, both bounce back. Not always.

Step in front of moving bus - you get squashed. Damage to bus? None at all.

FYI, I'm coming to PDX next Friday (6th), so if you know anyone who wants a ride from SEA to PDX early-ish Friday or back to SEA on Sunday, give a holla. Have room for up to 4 down, 5 back.

PDX?
You be here?
Let me buy you dinner!

Al, would love to break bread, but we go dutch. My wife will be with so can double if you care to. We'll be staying at the Mark Spencer Hotel on 11th.