The front of the bus, including the driver’s seat and front stairwell were torn off due to the impact of the collision. The train was also derailed. Ottawa police confirmed Woodard was one of six people killed.
More than 30 people were taken to hospital, including 10 in critical condition after the crash 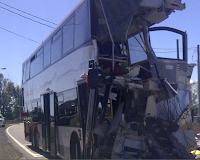