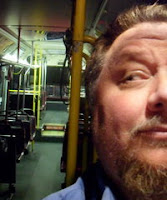 THE TRUTH ABOUT ATU 757 Membership at Trimet.


As a bus driver I belong to a Union. ATU 757. It has a long history with Trimet the bus company I work for. This history since I came on 9 years ago can best be described as Outrage and Retreat. There is the disturbing trend I see repeating over and over.

This path of failure is covered up but the trotting out of tired, well used Dodges. A dodge is not an argument it's attempt to shut up people or distract them without all that tedious facts and logic.

1. "But we Need the Money!" There is no end to the amount of money our Union can take. During a battle with the Management an extra $100 dollars was taken from our checks. This is a huge sum when multiplied out. Then when the battle is over, a battle we most lost, did the money stop being deducted?  Nope it's now an ongoing thing even though we are not in a contract battle at this moment. Just like greedy politicians, greedy business, our Union has found a need for that money and shows no sign of ever stopping. The Extra money is simply the Super Due's and woe to the driver who raises their voice.

2. Unity Unity Unity: When things go bad we need Unity, When we win (Remember back when we won things?) we hear the call of Unity. When someone rocks the boat, oh no we must have Unity aren't you for Unity? The call for Unity is the Marching cry for the Union. Good or bad, up or down it's always Unity. This has become a mask for failure and for oppressing voices that speak up. If you speak up against the Union, you are destroying Unity. Is all this is Unity is actually winning the battles? It cannot be unreasonable to question a Union that represents so many properties and workers at so many business. Perhaps too much Unity is simply not being  able to represent all those properties well?

3.BUT THE PAST! Yes I understand the past and what was done. Thank you that was awesome, but the battles of the past are not winning the wars of today. The cry of "the past" is not an argument it's something someone says to end arguments because there is no defense for our Union as it is today. Time and time again in the real world the past only counts so much. An Army that relies on it's historic victories and not on drill, practice, preparation and logistics soon finds it's self defeated. IF you lost in the past you don't keep doing the same thing over and over. When you hear about the past of Unions you know that person has simply used up their mental fuel.

4. "Unions are Strong" All around us Unions are facing hard times but too many it's still 1930. IT's like time has never changed. No wonder Unions are back sliding and corporations are laughing at us. We are fighting a battle like we did in the 1930's people talk like is 80 years ago and think like it's 80 years ago. Meanwhile Corporations higher the best lawyers to crush us like bugs. As one Union after another paddles over the waterfall, what we hear is "Paddle faster maybe we will make it" as we sail the same direction. Unions are not strong, other than a few branches of Government Unions they are on the decline and doing the same thing will only help them die faster.

5.'If you're Not Involved!" once again not a valid argument, it's a dodge. Since the union turn out for meetings is dismal at best we can more or less say that this is nothing more than a get out of argument free card. It's a good bet any Union member is not involved (Other than having their money taken) It's just too easy to find your self cornered by an argument to say "If you're Not Involved..." when you take my money I am involved and by the way does anyone really want to be involved? Maybe no one is turning up for a reason?
"If you're not involved.."argument is simple crap. That would be like saying that you don't get the protection of law if you don't vote, or you go to jail without a trail if you didn't vote. A person or an argument can be true and valid and they may have never stepped into the Union Hall.

6. "You're doing what THEY WANT!" this again is not used as proof, because it's shitty proof. It's used to silence you. This constant refrain that any opposition to the orthodoxy of the "Our Union" is exactly what Trimet Management wants is again a dodge. Trimet management doesn't want desertion in the Trimet ranks, they want us to not question things. They want more of the same where they win over and over and over. Why would they want Change in ATU 757. A boxer lying flat on his face needs to get up to fight!  Like so many things in this Union it's the opposite of what it appears to be. Going along and shutting up keeps Trimet on the winning gold medal podium.

7. "Yes but we protect you" I hear this again and again and Yes in the Garage I work in Union Reps do a great job. They do defend us. They go in and stand by us but that is in our Garage. The idea that the Union can skate on this accomplishment because Union reps are doing their jobs is a joke. I can get great service in a store yet the manager of that store can be horrible. You may have had a great teacher in the past in a school district that was awful, The idea that this "people doing a job well" is somehow proof that the UNION leadership is great! is simply wrong headed.

If you remove all the dodges.
1 We need money
2 Unity Unity Unity
3 But the past
4 Ignoring that Unions are failing
5 "If you're not involved..."
6 "You're doing what they want"
7 "yes but we protect you."

Remove all the above and there is precious little glue holding our little matchstick house together. A storm may be coming and we have become a house of weakness. When you hear the above arguments {how can you not} make a little mental note to your self.

"Memo to self: These are not arguments this is why we are not winning" sadly there is little else really being said outside of these common dodges.

Now I've started to hear not just talk but rage. Rage that our Union does such a poor job. I've heard talk about leaving the Union, abut forming a Tri-met only Union that responds to our needs. I've heard this talk almost every day. I wonder if the Union has. I wonder if they have any real arguments or only dodges.

I don't know if the Union is as at good protecting us as they are at protecting their asses. if I look at recent actions, if you remove all the Dodges used to silence others there is little left but hot air and tons of failure.

How much longer can this go on before their is a reaction? Who can say.

All I know is that waiting until the Union implodes it will be too late.

Sooner to later the stormy waters of the unknown may look better than paddling over the falls as so many other Unions have so willingly done.

Before it's too late.

PS: I woke up with three hours sleep and wrote this in record time. Please excuse the spelling and grammar... I'm going back to sleep. Love you all. and for those of you who are too afraid to speak out in person just Direct message me I would still like to hear what you think
Posted by Al M at 6:30 PM