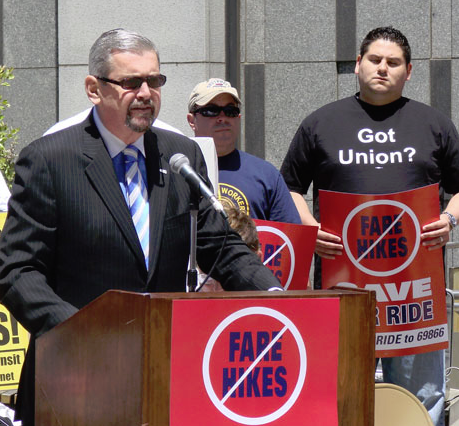 Workin' on the Railroad
The union representing Tri-Met light-rail operators wants its members at the controls of the new city streetcar.

Portland's new city streetcar isn't scheduled to begin running until March 2001, but it's already heading for its first big collision.

Ron Heintzman, president of Amalgamated Transit Union, Local 757, is threatening to sue Tri-Met if union members aren't at the controls when the trolleys finally roll down 10th Avenue on their way from Portland State University to Legacy Good Samaritan Hospital.

Heintzman's logic is pretty simple: These are trains, and who better to drive them than Tri-Met drivers? But the union leader's position could derail the desires of both the streetcar project's leaders and Tri-Met itself.

While most Portlanders think of Tri-Met when it comes to trains, the regional transit agency has played little role in pushing the streetcars. Instead, the project has been spearheaded by City Commissioner Charlie Hales and the management of the nonprofit Portland Streetcar Inc. Tri-Met's role has primarily been fiscal: The agency will fund two-thirds of the streetcar's operating budget and serve as the indirect conduit for $4.7 million in federal funds.

It's that federal grant that Heintzman says gives him leverage.

A 1980 agreement between Tri-Met and ATU provides that the union gets first dibs on any jobs created with federal funds. The current ATU contract with Tri-Met further guarantees that drivers of any vehicles operated by Tri-Met fall within the contract. Since two-thirds of the streetcar's operating funds will come from Tri-Met, Heintzman says hiring non-union trolley operators would amount to contracting out ATU jobs.

Leo Wetzel, associate counsel in ATU's headquarters in Washington, D.C., told WW that Tri-Met's future access to federal funds could be jeopardized if the 1980 agreement is not followed. This year the agency got $22 million in federal funds, out of a total budget of $237 million.

Ironically, Tri-Met doesn't really want to get into the trolley business and has only reluctantly agreed to undertake basic maintenance work. In an internal memo dated Feb. 16 that was obtained by ATU, Tri-Met's director of rail operations, Dan Caufield, wrote, "We are hoping for the minimum role in the streetcar operation, so our work on MAX doesn't suffer by our being diverted to something else."

The city also isn't rushing to bring Tri-Met on board. The project boosters have promoted the line as cheaper and more efficient than light rail.

"There are some issues we want [ATU] to be sensitive to, primarily that this is not Tri-Met," says Hales aide Marc Zolton. "We would like to approach it differently costwise. We've got to pay our bills and operate this car less costly than other transit operations in this area."

Earlier this year, PSI's negotiator, Rick Gustafson of Shiels Obletz Johnsen, floated the idea of hiring drivers employed by Laidlaw Transit Inc. Heintzman says he rejected that idea based on poor labor relations with the company in the past.

"If they're just going to hire people off the street, they're not going to get professionally trained people," he says. "And I think that's a big mistake from a safety standpoint."

Hales insists that the two dozen streetcar operators will be competent and well-paid. But, he adds, "Does that mean we're going to take Tri-Met's [labor] agreement and simply scratch out 'Tri-Met' and write in 'Portland Streetcar Inc.?' I don't think so."

Heintzman says that although he first broached the topic of representation more than seven months ago, negotiations are just getting off the ground. The union leader met with Gustafson and Hales last month.

While Gustafson and Hales both express optimism that the two sides will reach agreement, Heintzman is frustrated by his inability to get a straight answer. "They're stalling," he says. "They're going to try and hire other than Tri-Met folks at lower wage and benefits--and we're not going to stand for it."

The final decision rests with PSI. Gustafson says the threat to Tri-Met's funding worries him less than the possibility of getting in a "contentious" relationship with ATU, which he described as having "very good political standing in this region."

The union's clout is unlikely to have escaped Hales' attention as he considers his reelection bid and future mayoral aspirations. As Gustafson says, "Charlie's made it abundantly clear he wants us to work with the ATU."